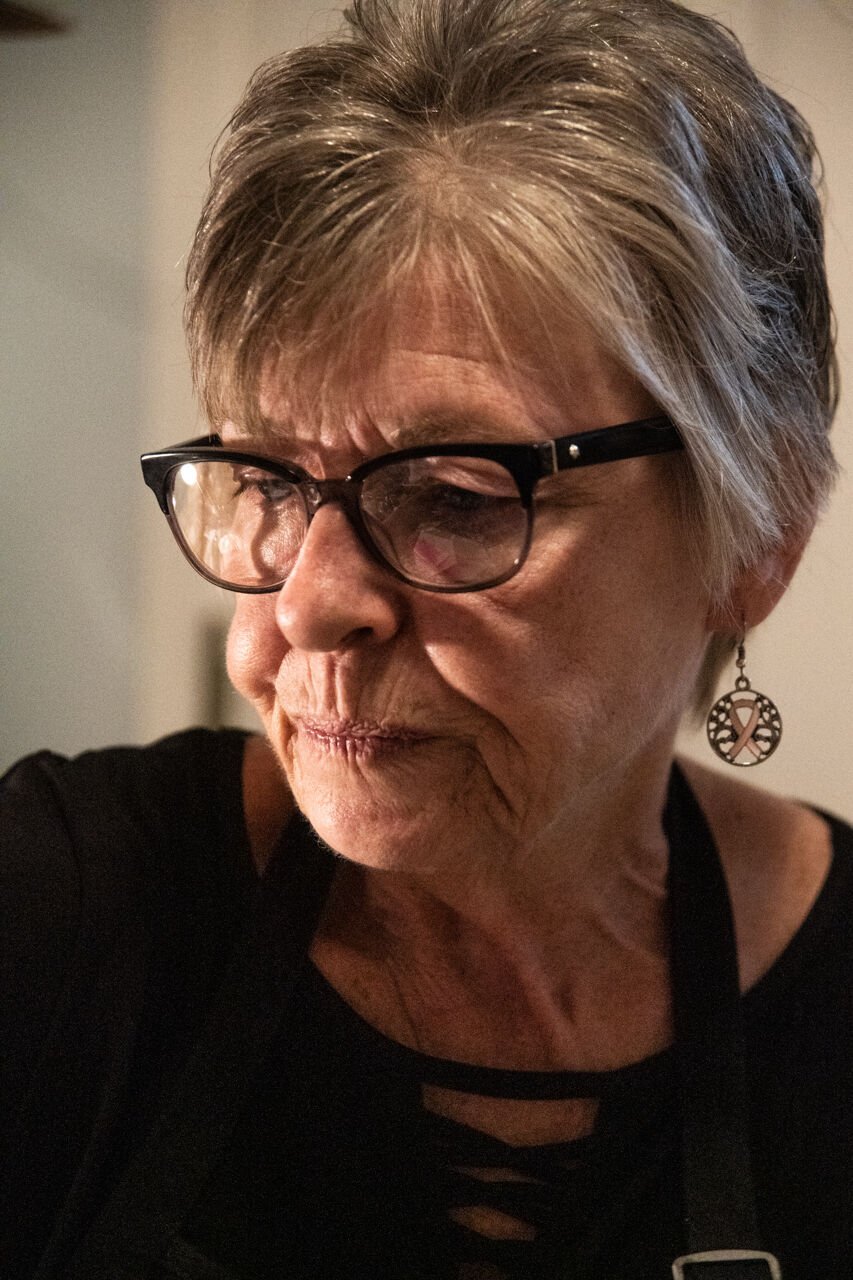 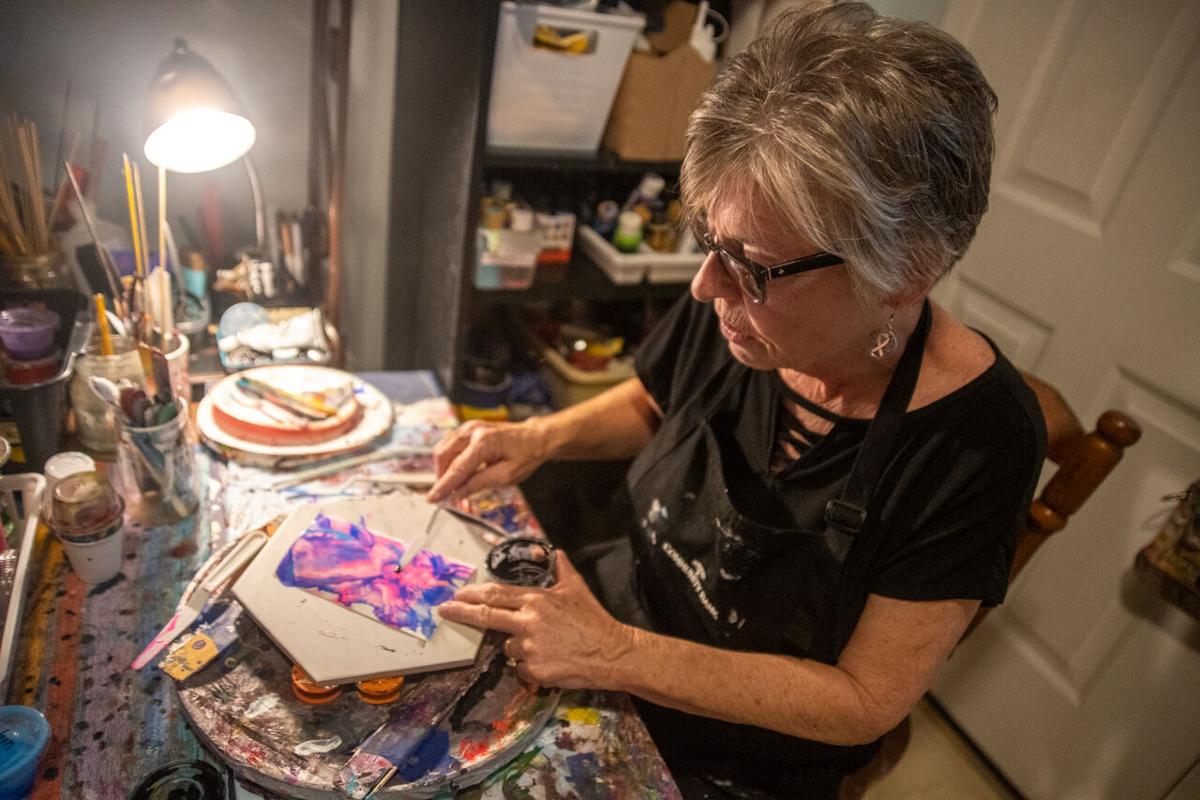 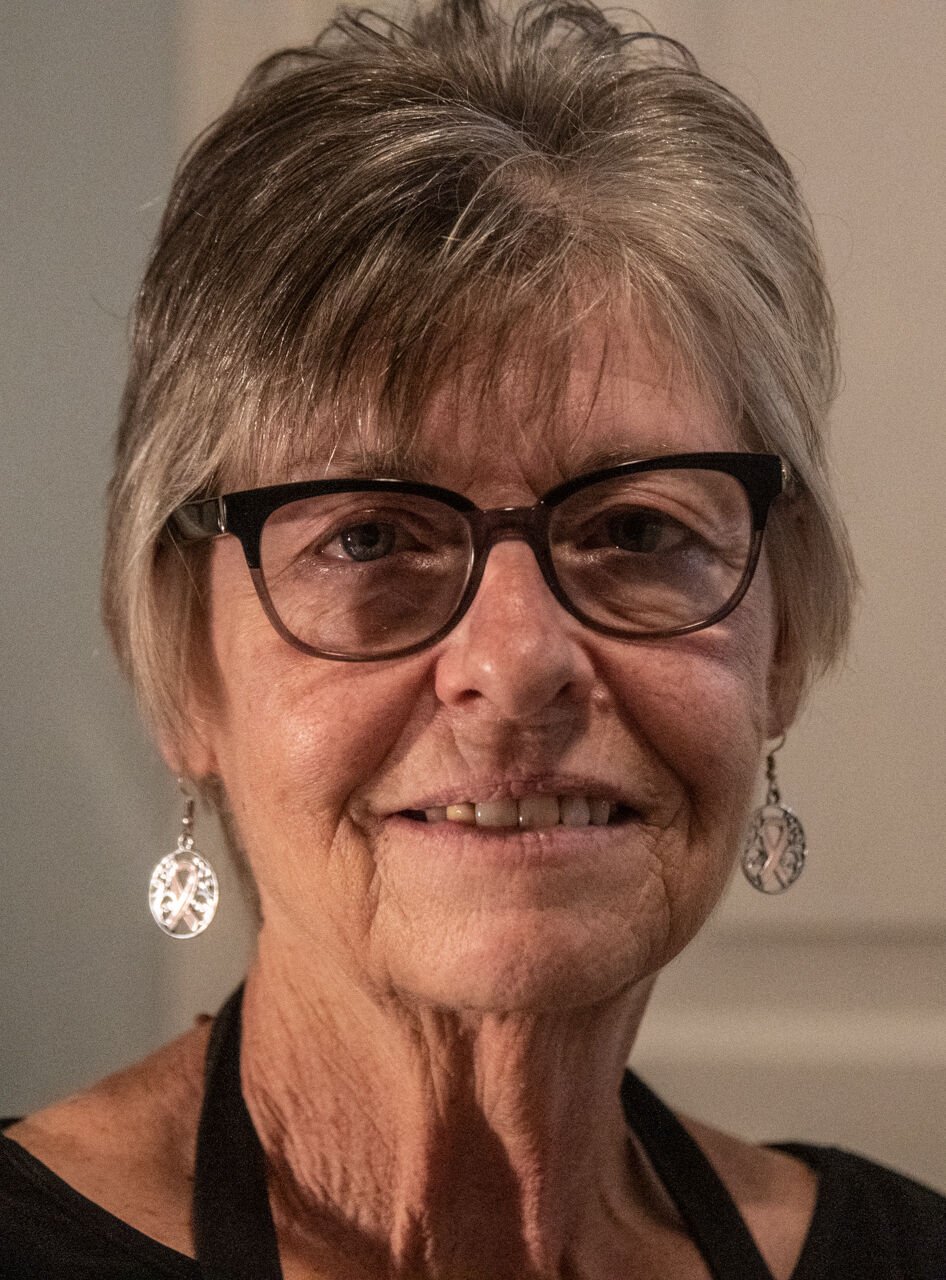 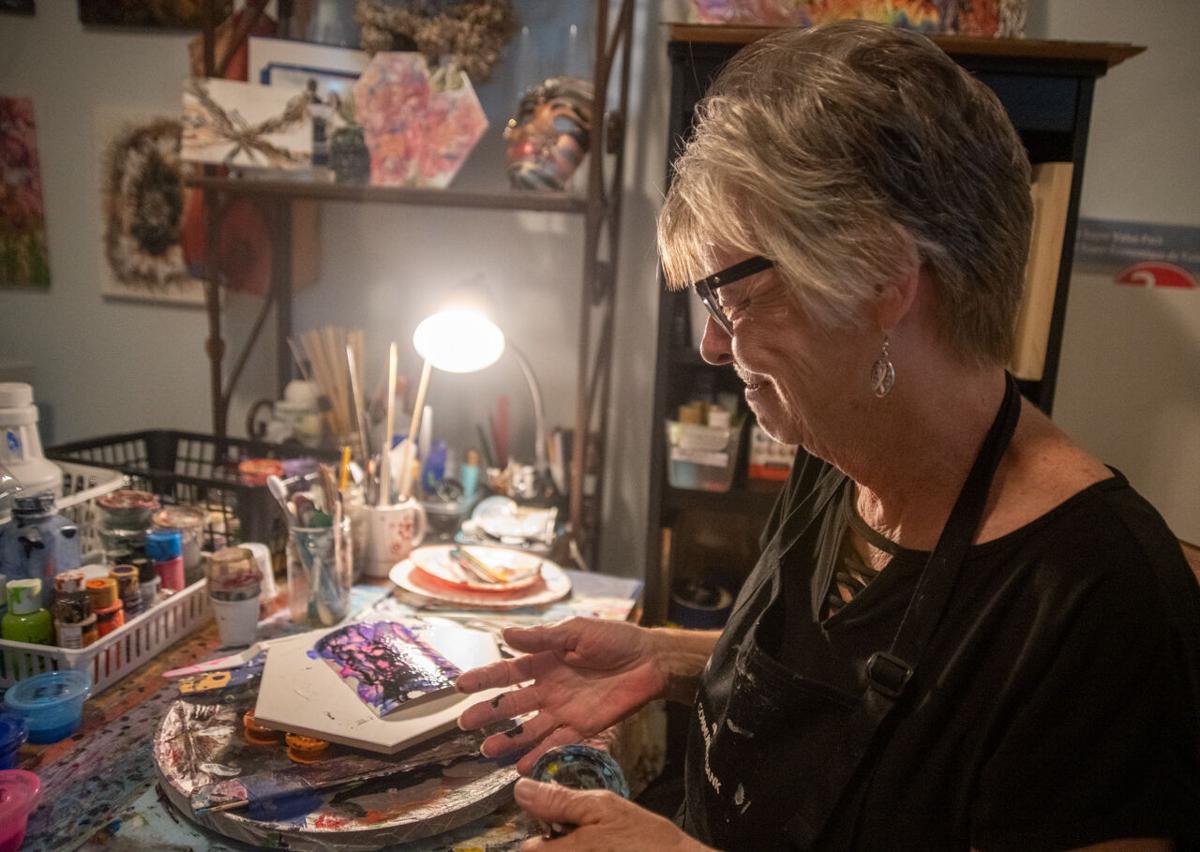 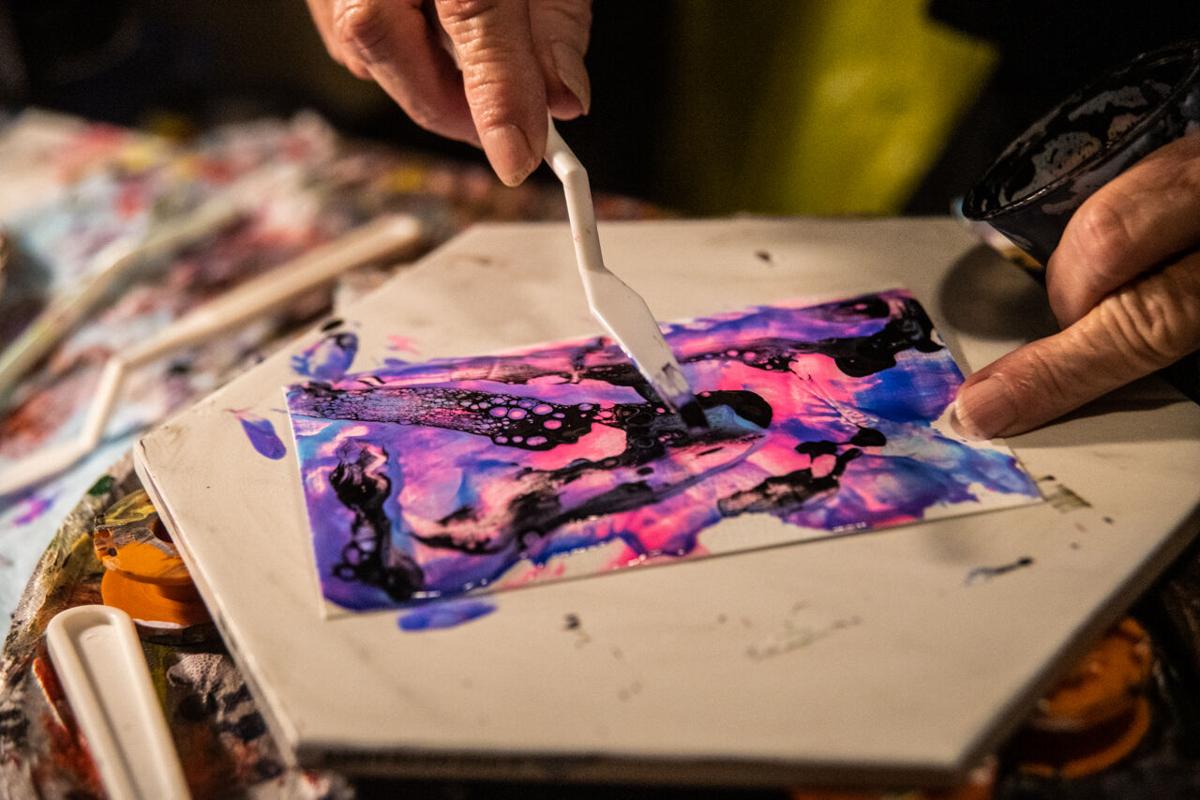 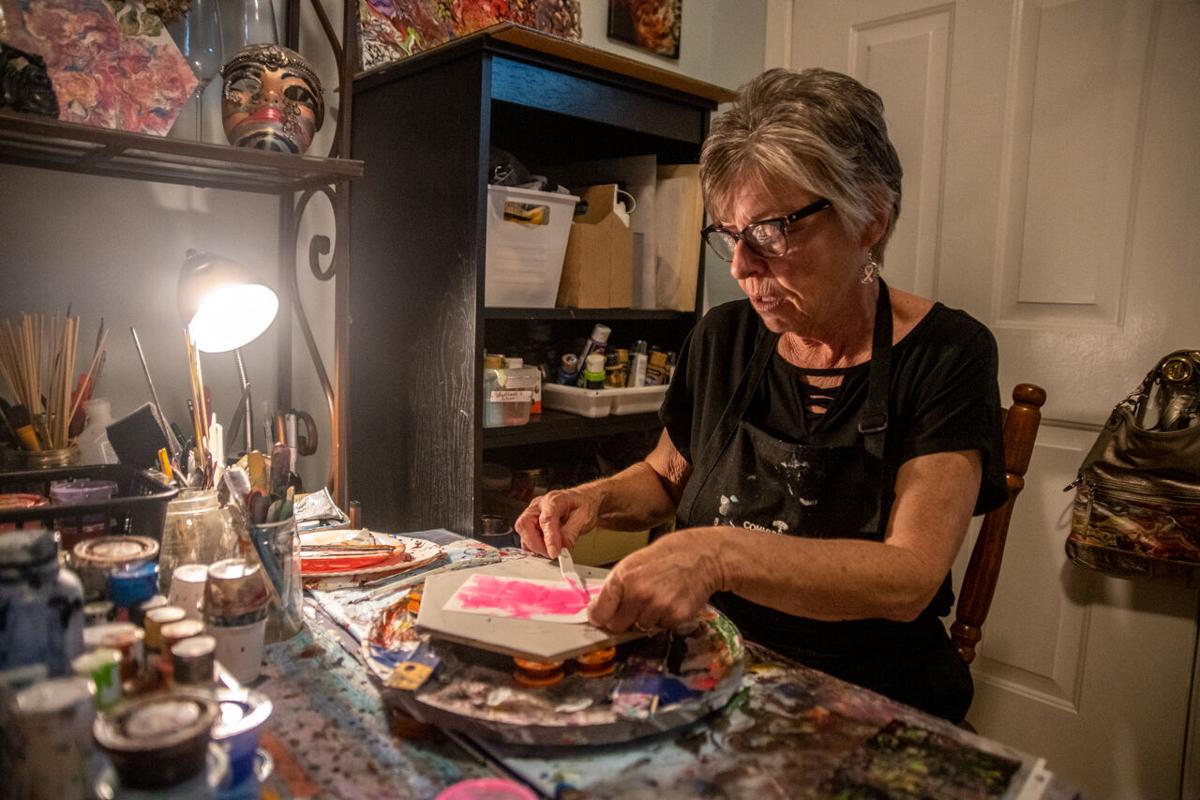 Teresa Mackey took broken pieces of jewelry that she found around her house and turned them into beautiful pieces of art. That’s symbolic of the path her life took in recent years. What seemed shattered now shines.

“My art let me focus on something other than my sickness, and it saved my life,” she said. “I know that God left me here for a reason. I think it’s to share art with the community.”

Mackey, 63, of Laurel had a lifetime’s worth of maladies and heartaches jammed into an unrelenting 18-month period. The longtime local teacher was diagnosed with Hepatitis C in May 2019, and that caused cirrhosis of the liver. Doctors then discovered that she had diabetes. Mackey barely had time for that to sink in before a mammogram and biopsy that October revealed that she also had breast cancer.

Those serious health problems forced Mackey to retire early from the profession she loved to become a full-time fighter to beat the diseases and to save her life. She had been teaching in the Jones County School District, at East Jones Elementary and The Star Reach Center, for eight years after spending seven years at Mason Elementary and 10 years teaching kindergarten at Highland Baptist Church.

Mackey began an aggressive treatment plan of one long chemotherapy treatment every three weeks and radiation treatments five days per week for a six-week period. Her husband Mark took her to all but two treatments, but he couldn’t be by her side because of COVID restrictions. It was a bad time to be going through so much with limited support.

“But I praised God and worked hard to have a good attitude through it all,” she said.

Mackey was met with more heartache during that time, when her daughter Mallory moved to Pennsylvania and was diagnosed with multiple sclerosis and her son Quinn in Hattiesburg had a close friend who died under tragic circumstances.

“All of my pillars were knocked down,” Mackey said.

And not being able to be a pillar for them was even more painful.

The weight of it all finally came crashing down on her during one of her chemo treatments.

“I had been feeling the depression, and I was fighting it,” Mackey recalled. “I’m not a big crybaby … but my husband couldn’t come in. He was stuck in the parking lot for five or six hours, and it was hot, and that was the straw that broke the camel’s back.”

That’s when nurse Lagena Sims Everette came to check on her.

“She saw me crying, and I just started unloading,” Mackey said.

After hearing all that her patient was going through in the summer of 2020, the health professional planted the seed that gave harvest to her new passion.

“She suggested that I get a new hobby to distract me from all of the chaos,” Mackey said. “I’d read 200 books and put together 100 puzzles, so I didn’t know what else to do.”

That’s when she started taking notice of the broken pieces of jewelry and other knick-knacks around the house. Her breaking point became her turning point.

“I started taking things apart and making new things with old junk,” Mackey said. “That’s the old science teacher in me, I guess.”

She rang the bell to signify her final chemo treatment on Oct. 20, 2020, and she poured herself into her new passion, which went from piecing together pieces of art to acrylic paint pouring.

A year later, her artwork has become a fixture in local events such as Live In Laurel, as prizes for the winning team at 320fifthstreet trivia night and for sale in the gift shop at Lauren Rogers Museum of Art. A couple of her pieces even adorn the walls of the doctor’s office where she received life-saving treatment and life-inspiring advice.

“If it doesn’t move, I put paint on it,” Mackey said, laughing at the statement her husband made and pointing to a recent purse-painting project.

Everything from discarded cabinet doors from a neighbor’s renovation project to four-inch tiles became canvases for her colorful works, which she learned how to do by watching videos and through a lot of trial-and-error.

“Some were fabulous, some were failures,” Mackey said.

But they all served the higher purpose of healing, even as she dealt with the cancer diagnosis of her mother, Joan Tisdale Dean Mahoney, who died in June at 86. Mother and daughter had been especially close after husband and father Walter Dean died when little Teresa was only 5.

Her new hobby helped her deal with the new heartache.

“When Mom came home and was on hospice, I could escape into my art,” Mackey said.

After she died, Mackey started becoming depressed but once again used art as her “mental-health therapy.” Some new paint colors arrived at just the right time, so she immersed herself and that “inspired me to journey forward,” she said. “She was a great fan of my art and a wonderful mom.”

Mackey has also been helped along by a transplant — neighbor Bonnie McConkey, who moved to Laurel from Colorado four years ago. McConkey is a 20-year survivor of breast cancer, so she represents hope and encouragement for a new survivor such as Mackey.

“Of course, she found out at the scariest time possible,” McConkey said, referring to the era of COVID and all of her friend’s other health scares. “We had a lot of driveway visits.

“It’s easy to just shrivel up when you’re going through anything like this. When Teresa started her art, it became a full-time passion. I could see a spring in her step and a sparkle in her eyes.”

At 60, McConkey celebrated the anniversary of her 10 years of being cancer-free by setting a goal of pedaling 60 miles on 10 trips, but after a half-dozen trips, she scaled those back to 20 to 40 miles each since the longer journeys ceased to be enjoyable. But the principle is the same.

“You have to have something that makes you want to get out of bed and do it each day,” she said. “It may not be bike-riding or art … it may be caring for children or gardening. But everybody has something.”

McConkey describes her friend’s artwork as “cute, fun, whimsical and hilarious,” but she also tailors it to the person she’s making it for. “She’s thoughtful to her audience,” she said, pointing out that she made some pieces for one neighbor whose decorative style is black, white and gray. “She didn’t force her bright Bonnie colors on them.”

The benefits of Mackey’s new passion have been immeasurable.

“I see what it did for her,” McConkey said. “She has been energized and revitalized.”

Mackey is even teaching again — art lessons for a handful of students at her home studio — and she had plans to start a web market for her art at TeresaMackey.com. Her mission is more about inspiring than making money, though. She has a strong desire to give back to the community.

“I’m thankful I can be inspirational to others,” said Mackey, noting that two or three people she knows have been diagnosed with breast cancer since she was, and another friend died after a 20-year battle. “I can’t imagine how people go through something like this without support like I had.”

Mackey had a message for anyone who is dealing with breast cancer or any other potentially life-threatening ailment: “Find something you have passion about and get so involved in that you don’t sit around worrying about your treatments and sickness and all of that all the time.”