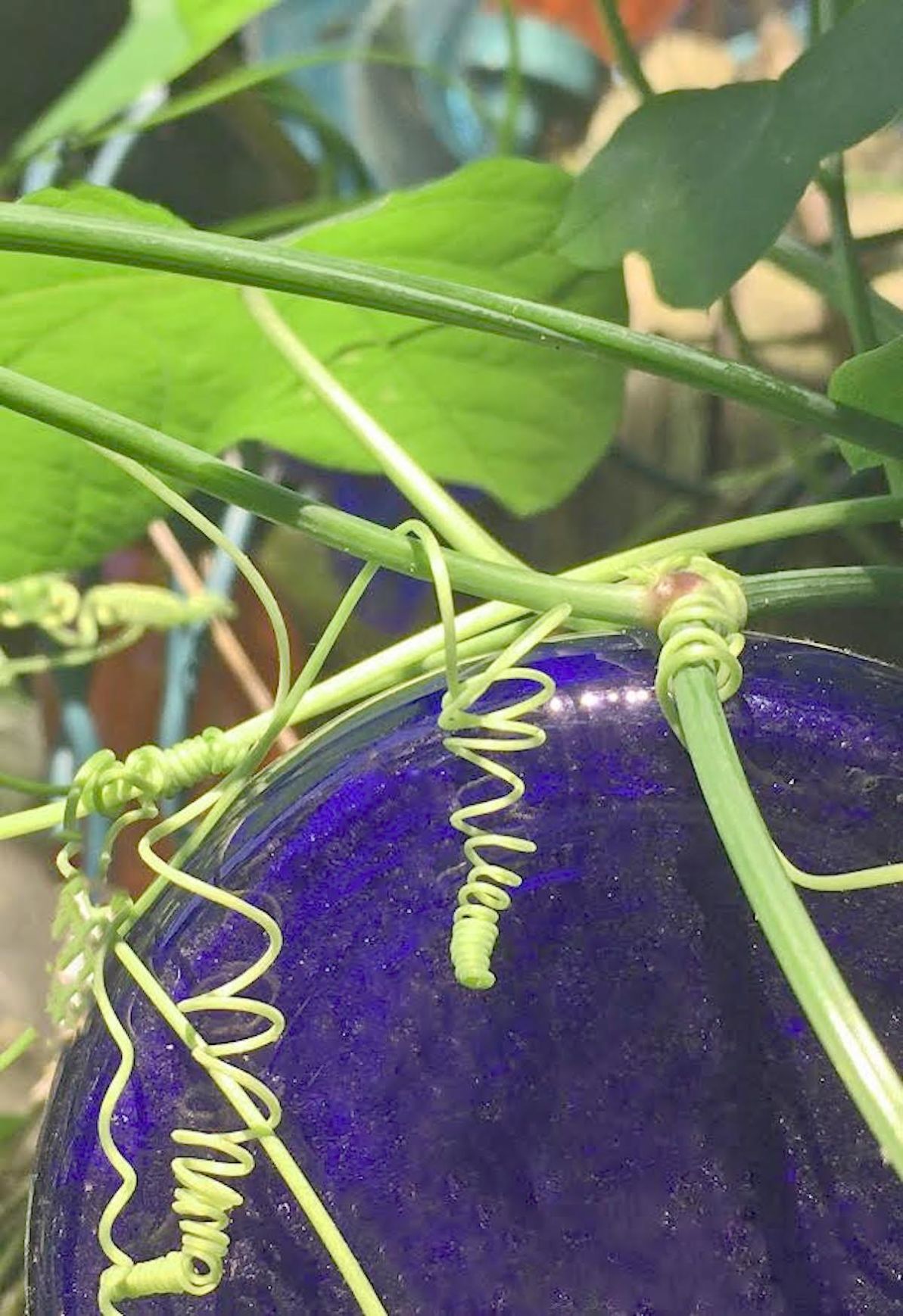 Ever notice how a cat can’t help raising its rear when you stroke its back? Vines do the same thing. Sorta.

I spent a few minutes the other day carefully uncoiling small vines from a bottle tree and trying to get some to wrap around a stake. It made me recall one of the marvels from my college plant physiology classes, about what makes vines climb.

Not all vines twine, of course. Some have to be tied, others use either little aerial rootlets to attach to supports, and some use backward-facing thorns as hooks. But what about those that do twirl around whatever they touch? Not all do it, but those that do are pretty determined.

Without getting into calcium pathways, contractile proteins and all that, the way some plants grow toward things, the turning response to stimuli called tropisms, can be pretty amazing.

We are all familiar with how sunflowers follow the sun through phototropism, and early roots “know” to grow down through the geotropic effects of gravity. There’s even one called skototropism, in which vine seedlings on a jungle floor grow toward shadows in order to find something to climb.

But my favorite is thigmotropism, or toward touch. It’s what causes some vine stems or their little support tendrils to wrap around things. Waving around in the air at first, when one of these touches a support, be it a small tree, fencepost or trellis, the touched side starts growing more slowly while cells on the “away” side keep growing normally, which pushes the vine toward the support. And the coiling takes it from there.

By the way, just as it’s a myth that water swirls down drains either clockwise or anticlockwise, depending on north or south of the Equator, vines don’t coil naturally one direction or the other. I have had some tendrils on vines actually reverse their direction from one week to the next.

It’s just one of those little things to think about while knocking around the garden, especially if you grow different vines. Funny how most gardeners think it is a no-no to plant more than one vine near one another. I usually plant perennial clematis and climbing roses together, for example, and because my native maypop passion flower vine gets really boogered up by gulf fritillary butterfly larvae, I mask the bareness by growing it with spring-flowering crossvine and yellow Carolina jessamine.

One of my latest projects is a gourd house, which is tall posts covered with heavy gauge wire mesh like they use to reinforce concrete walks and patios. Gourd vines make great shade very quickly, and I end up with dozens of gourds hanging down by mid-summer. To further the interest, I interplant a few other annual vines such as black-eyed Susan vine, night-flowering moonvine, hummingbird-attracting cypress vine and heirloom hyacinth bean with its lavender flowers and deep purple pods.

I don’t overdo this because some vines are real thugs and will overgrow and shade out others, but it’s an interesting effect. And because the support mesh is such heavy duty mesh I can easily neaten it all up in early winter with my string trimmer.

Anyway, as I prepare my summer garden to do its thing, I have found myself using all sorts of supports for various vines, from an arbor to tie my climbing rose onto and purple-painted tee-pees for my beans and knobby rebar for tomatoes.

Some I’m having to tie up, some are doing their thigmo-thing on their own. Some are so aggressive I’m having to move my chair to keep it from getting wrapped up overnight.

Felder Rushing is a Mississippi author, columnist and host of the “Gestalt Gardener” on MPB Think Radio. Email gardening questions to rushingfelder@yahoo.com.