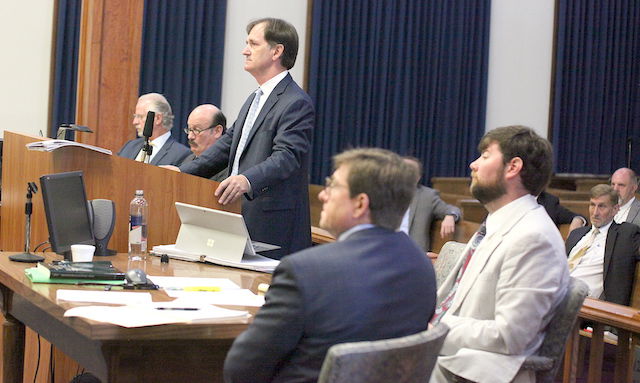 Plaintiffs’ attorney Michael Simmons makes an argument before the judge as attorneys from both sides listen. 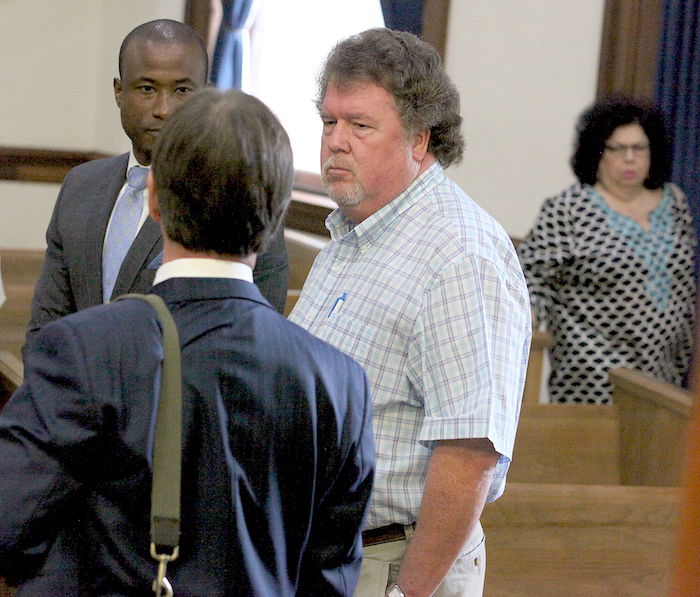 Marlan Baucum talks to attorneys after the ruling as wife and cancer victim Deidra Baucum walks behind him in the courtroom. (Photo by Mark Thornton)

Residents blame cancer on pollutants buried on their property

In a ruling that was called “a watershed moment” in an ongoing oilfield-contamination case, Judge Dal Williamson determined that the plaintiffs can pursue personal injury claims in Jones County Circuit Court but claims of property damage will have to go through the Mississippi Oil and Gas Board.

Tay and Deidra Baucum are suing Petro Harvester Oil and Gas Co. LLC and its legacy companies for health problems related to contamination of water near their property on Wansley Road that they blame on oilfield waste that was buried nearby. The lawsuit, which was filed six years ago, has been at a standstill for about three years while both sides were working and waiting for a ruling on how to proceed, said one of the Baucums’ attorneys, Michael Simmons.

“Judge Williamson, as always, was seeking to get the facts of the case and follow the law,” Simmons said.

David Baria, another attorney for the Baucums and a 2018 Democrat candidate for the U.S. Senate, said, “This is a watershed moment in the case because it allows us to proceed.”

Though the ruling “was not everything we wanted,” Simmons said, it was a “fair reading of case law,” Baria added. “We’re just happy that we can finally go forward with the litigation.”

Dee Baucum has been undergoing treatment for esophageal  cancer, and the lawsuit claims that her illness is related to polluted oilfield waste that contaminated the area and seeped into the groundwater and aquifier system.

A half-dozen or so people in the area have been diagnosed with cancer in the last few years, sources with knowledge of the case say.

The Baucums’ lawyers said they weren’t seeking a specific amount of money for damages.

Petro Harvester is the current owner of the oil well, but past owners that are listed in the lawsuit include Champion Oilfield Service LLC, Boots Smith Oilfield Services LLC, Jerry Huddleston, Gary McAdams and Comstock Oil & Gas, which is owned by Dallas Cowboys owner Jerry Jones.

Williamson determined that the state Oil and Gas Board has jurisdiction over property claims related to oil wells, so that part of the lawsuit will have to go through that agency.

The Baucums claim that 600 drums “and other toxic materials” were discovered buried on their property and they accuse the companies of disposing of the waste in pits outside of the well site without permits.

Field inspectors for the Oil and Gas Board have said that nothing on the property presents a danger to the public and that there was no evidence of contamination.

The Baucums’ lawsuit claims that trees were killed “along the path of seepage” along a creek from the waste pits to their property.

While arguing that the circuit court should handle the matter, Simmons said, “Test results would be worthless …. The pits have been bulldozed and removed. They’re no longer there.”

The U.S. Environmental Protection Agency and state Department of Environmental Quality grant the state Oil and Gas Board the authority to regulate disposal wells.

Lawyers for the defendants argued that the Baucums couldn’t claim that the Oil and Gas Board is biased because that would open the door for all complainants to claim that “they can’t get a fair shake.”

It is unclear when the personal-injury portion of the case will proceed.

“We’ve got some procedural matters to take care of and we’ve got to get an order entered before a date can be set,” Simmons said.

A lawsuit represents only one side of a legal argument.