The Laurel City Council unanimously supported a two-week order for employees and customers to wear face coverings or masks when they’re in local businesses to help prevent the spread of COVID-19.

Councilman Stacy Comegys proposed the order, which went into effect at 8 a.m. Wednesday and will continue through 8 a.m. July 1.

“Studies show it will reduce the spread of the virus,” Comegys said before the vote. “It won’t affect anyone going to stores. It will protect our citizens.” 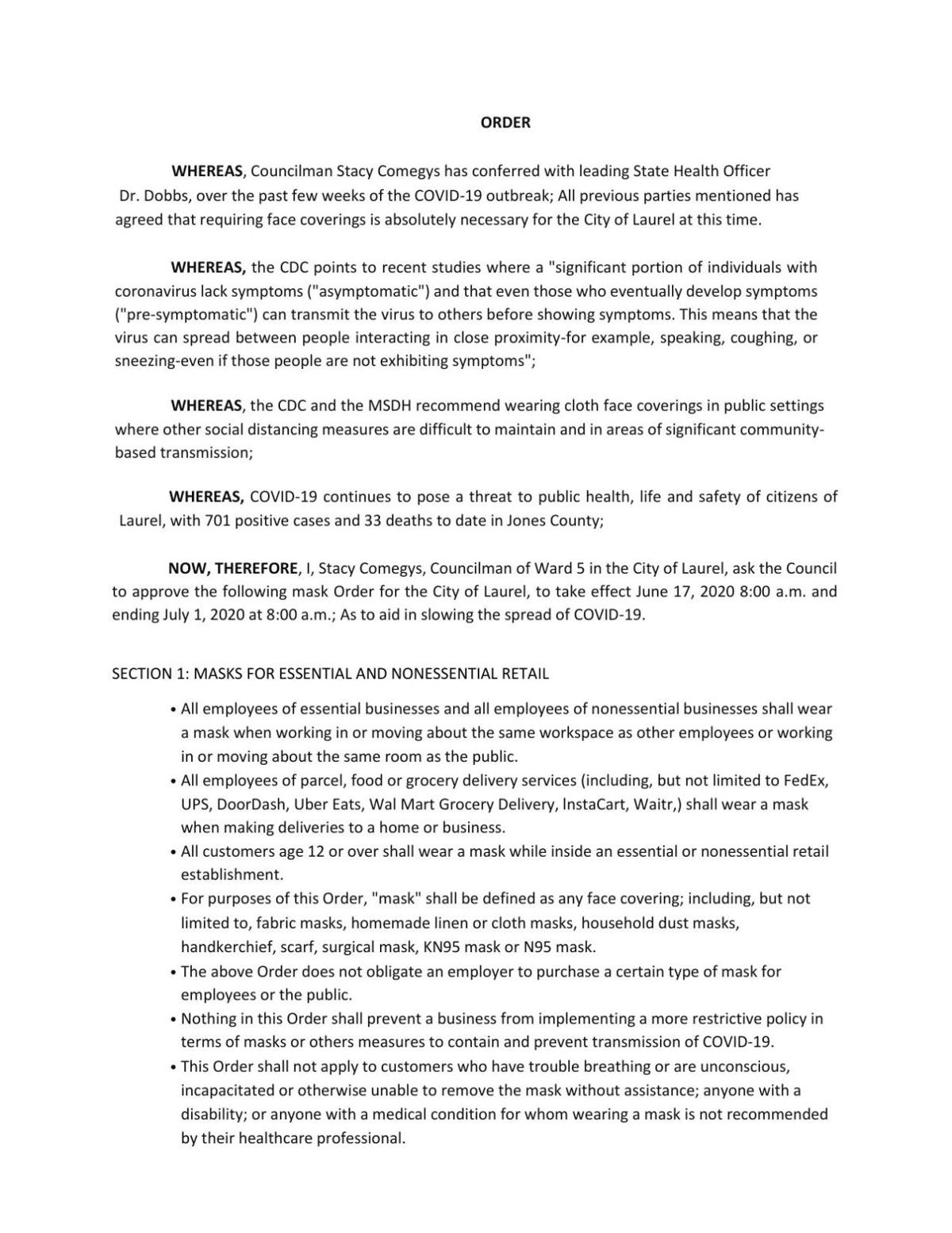 “I applaud the Council for making a reasoned, wise decision,” he said in a phone interview shortly after the meeting. “It’s an easy thing for people to do, and it will protect the community, businesses and the health-care system … It’s a good idea.”

The order calls for all employees of essential and nonessential businesses and all customers over age 12 to wear some sort of face covering, unless they have a breathing problems or medical condition for which a health-care professional has recommended they not wear one.

The order does not obligate employers to provide masks for employees or customers and it doesn’t prevent them from adopting more restrictive measures.

When asked about enforcement or the temporary new law, Mayor Johnny Magee said the order “has no teeth,” and violators won’t be fined. He did, however, say that the city has supported all of the state Department of Health and Centers for Disease Control recommendations for social distancing, washing/sanitizing hands and wearing masks in public. The council’s meeting room has been set up to allow for officials and audience members to be at least six feet apart since mid-March. Comegys had been participating in meetings via teleconference from that time until Tuesday.

His order, which was drafted after he conferred with Dobbs, states that retailers “are encouraged to post notice of the requirement for customers to wear masks at each public entrance of the store and to provide reasonable oversight of their customers to ensure compliance.”

During the citizens’ forum portion of the meeting, Faye Jackson expressed her support for the mask requirement. She said three of her nurse friends and seven other friends have died of coronavirus.

“It’s real and it’s bad,” she said. “The controversial part is wearing a mask … and that protects all of us.”

“I wondered why Jones County was left off because our numbers are very high,” she said.

That’s because the requirement was met with “some resistance” in his home county, Dobbs said with a chuckle.

“In those other counties, we did a lot of work to make sure it was acceptable,” he said. “There was some reluctance with a lot of locals in Jones County.”

Neighboring Hattiesburg has required masks in businesses for several weeks, and that’s been a boost for Laurel, Magee said.

“A lot of people on Facebook said because of the requirement to wear masks in Hattiesburg, they’ve been coming to Laurel to shop and eat … and the numbers reflect that,” he said.

Magee opened the meeting by talking about the city’s unexpectedly high sales-tax numbers from April, which were released this week.

“Evidently, we’re doing something right, because again, the sales-tax numbers were surprisingly good,” Magee said. “There was all of this doom-and-gloom that we would be hundreds of thousands of dollars down, but we’re still in the black.”

So far this fiscal year, the city has collected $8.33 million in sales tax payments from the State Department of Revenue, which keeps more than 80 percent of each municipality’s tax collections. That’s almost $48,000 more than the city had collected at this same point last year despite going through the governor-ordered shutdown for a month-and-a-half of the collection period this year.

Councilman George Carmichael added, “We have resilient people. We’re always up for a challenge.”

“In the social-media era, everyone has a platform,” he said. “There’s always a gadfly with a counter-message. People need to read trusted sources and look at science.”

Dobbs admitted that there has been contradictory and inconsistent information put out by health officials from the highest levels of government to the local level.

“We’ve tried to be consistent,” Dobbs said of the Mississippi Department of Health.

Asked why people other than the elderly and otherwise immuno-compromised should wear masks, he said, “Masks are to keep asymptomatic people from spreading the virus around the community. If you prevent the virus from cycling, it helps everybody.”

Dobbs offered a simple, straightforward message for people to follow until there’s a vaccination: “Social distancing, hand-sanitizer and hand-washing, staying away from mass gatherings and wearing a mask are effective in slowing the spread. If everyone did those things, we could drive this thing down to such low levels, we could get back to normal.”