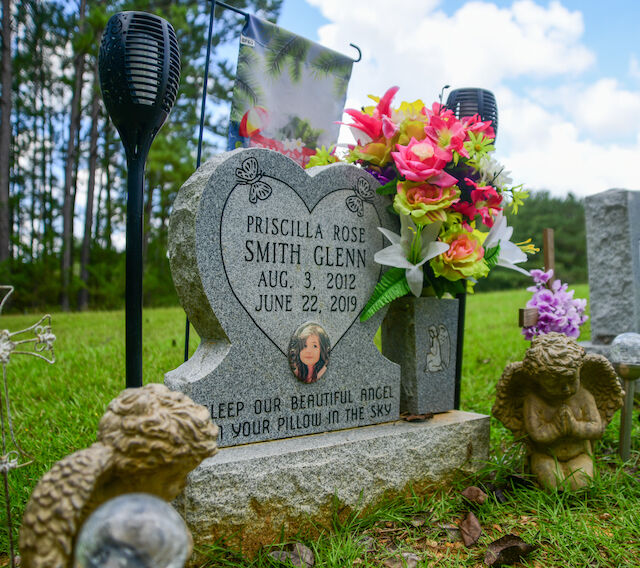 The silence on Smith County Road 84 rises from the sloping fields and swallows everything. On a knoll across from Walnut Grove Baptist Church sits a small cemetery, where a girl’s photograph graces a headstone, flash-frozen, 6 years old forever. She is buried beneath the only shade tree around.

In June of 2019, Priscilla Rose Smith Glenn drowned at a residence on Kimberly Drive in Laurel.Those close to the matter have alleged over the past year that Priscilla’s death was the fault of her caretakers — that her mother, Gabriella Glenn, had used heroin and prescription-grade medication that day during a house party, where several adults were present, and that it was her neglect that led to the child’s death. She hasn’t been arrested or indicted.

Priscilla was a little shy, until she warmed up to you. Then she was “jabber, jabber, jabber,” said Neysha Stringer, her grandmother. She loved to dress up, but not in girl clothes.

“She wanted Ninja Turtles and Army stuff,” Stringer said. Her voice lit up when she spoke about her granddaughter. “She was bow-legged when she ran, and it was the funniest thing. Her laugh would light up a room because it was so distinctive and funny. She loved everybody. She loved being a helper. She loved babies.”

Stringer laughed when she told a story of Priscilla going to school. She’d received a photo from the girl’s first-grade teacher — Priscilla, with her feet up on her table, jacket draped over her head, refused to do school work because she was “waiting to see daddy.” Alexander Glenn, her dad, is active-duty Army and was going to get to see her in a day or two.

The girl’s family now awaits justice more than a year later and have planned a demonstration outside the Laurel Police Department for Monday. Stringer believes action should have been taken immediately after Priscilla’s death. The LPD concluded its investigation and deferred to the District Attorney’s office, however, said Assistant DA Dennis Bisnette. Those findings, which haven’t been made public, will soon go before a grand jury. Gabriella Glenn faces felony child neglect.

A knowledgeable source told Stringer that a toxicology hair-follicle test was administered to Glenn by LPD investigators about a week after the incident. Stringer said emergency room doctors could clearly see that the girl’s mother was high. She also referred to a recent case wherein caretakers were immediately arrested.

In that case, Howard Ballou of WLBT-TV in Jackson reported on Aug. 20: “Tonight, family and friends grieving the loss of a 5-year-old found at the bottom of a pool. The Pelahatchie Police Department received a call just after 3 p.m. about a 5-year-old girl unresponsive in a pool at Yogi Bear’s Jellystone Park in Pelahatchie …” The mother, Sky Frith, 24, of Lake Providence, La., and her boyfriend were arrested and charged with felony child neglect. Two other children with the couple were given to their grandmother for care.

“On 8-27-19, LPD officers responded to Kimberly Drive in reference to a tragic child drowning incident. Officers and investigators interviewed witnesses and took statements at the scene and in the days following. Information was forwarded to the Jones County District Attorney’s Office for their consideration. As always, the Laurel Police Department fully supports any decisions made by their office. Our sympathy goes out to the family in the wake of this tragedy. There will be no further comment at this time.”

With so much inert time having passed, Stringer is worried that there will be no justice.

“There were drugs and alcohol at the party, the whole nine yards,” she said. “Even when we got to the hospital, the doctors said drugs were involved. They said, ‘We need the police here.’ Everyone at that house was high as a kite.”

Bisnette said, “Because we present something to the grand jury, it doesn’t mean there will be an indictment. No arrests were made at the time of the incident, and that would be consistent with what we’ve seen in the past. We’ve had several incidents here where children were killed … It’s a tragic accident. (The family) seems to feel that Glenn was under the influence, and that’s where their issue is.”

Stringer described surveillance footage of the Kimberly Drive residence recorded on the day of Priscilla’s death. She only saw the footage this week when she met with an attorney at the DA’s office. The footage doesn’t show Priscilla’s death, but it shows her and another girl, about 12 years old, heading outside and toward the swimming pool.

“(The other girl) grabs a glass of water and goes inside, and Priscilla rounds the corner and, I guess, goes straight to the swimming pool,” Stringer said.

“Literally the day after the funeral, I was at the police station,” she said. “I followed up every couple of weeks. I told them, ‘You can’t just let this go. That was our baby. She was with the mother for one day. She hadn’t seen Priscilla in months.’”

One piece of the legal puzzle remains missing. The hair-follicle test apparently never made it to the DA’s office, Stringer said. She was told that by an attorney there, she said, and that the whereabouts of the test will be investigated. For about seven months, she didn’t hear anything about the test because the crime lab was backed up. It’s well-known that the Mississippi State Crime Lab has faced staff shortages and backlogs in recent years.

With evidence missing, the attorney was not confident that the case would make it past the grand jury, Stringer said.

“We’re all devastated,” she said. “We honest to God thought (law enforcement) were going to do their jobs. … I’m never going to be the same after this.”

The Jones County Sheriff’s Department arrested Gabriella Glenn on Feb. 27, 2019, for felony possession of methamphetamine and possession of a weapon by a felon. She was sentenced to drug court.

Stringer will be part of the demonstration in front of LPD headquarters at 8:30 a.m. Monday.