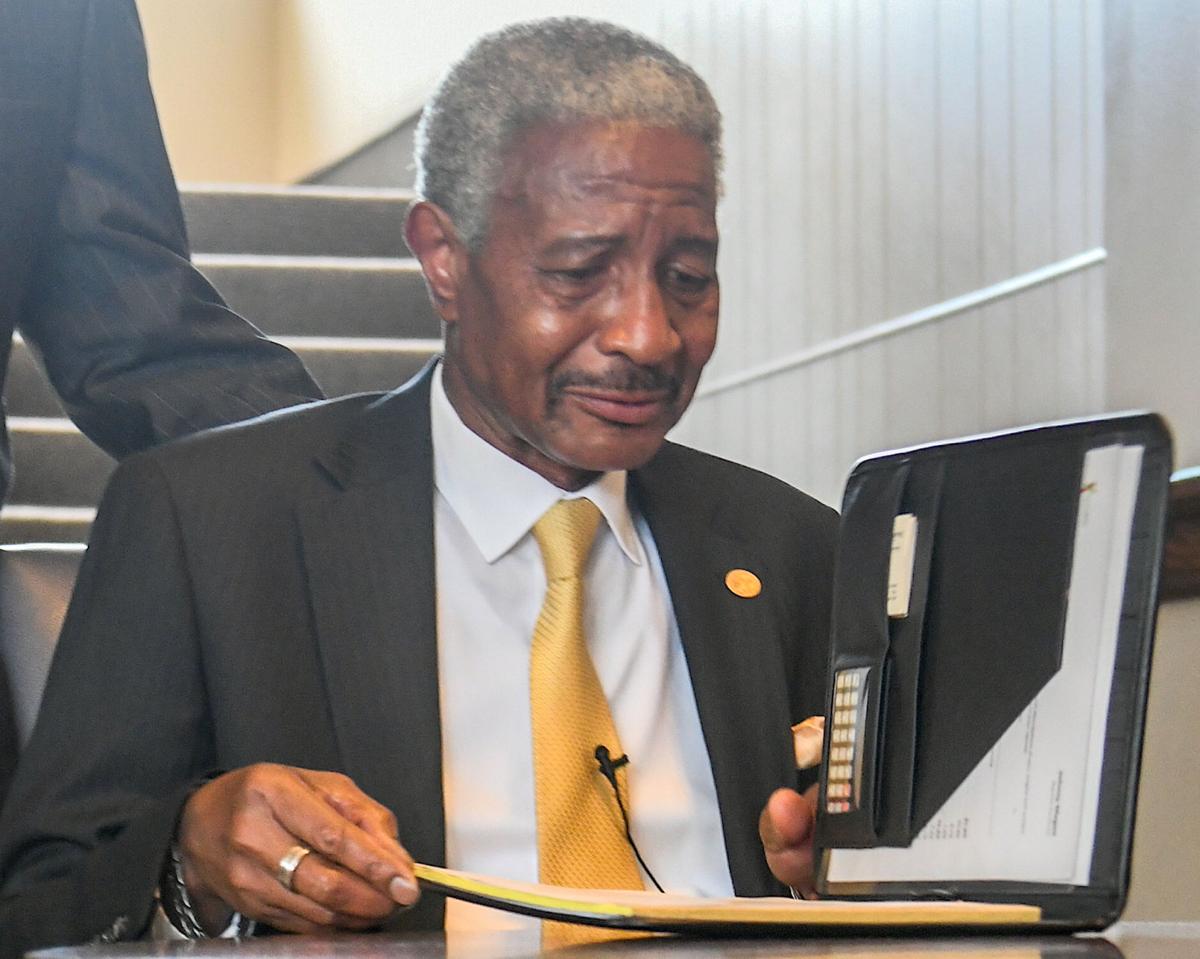 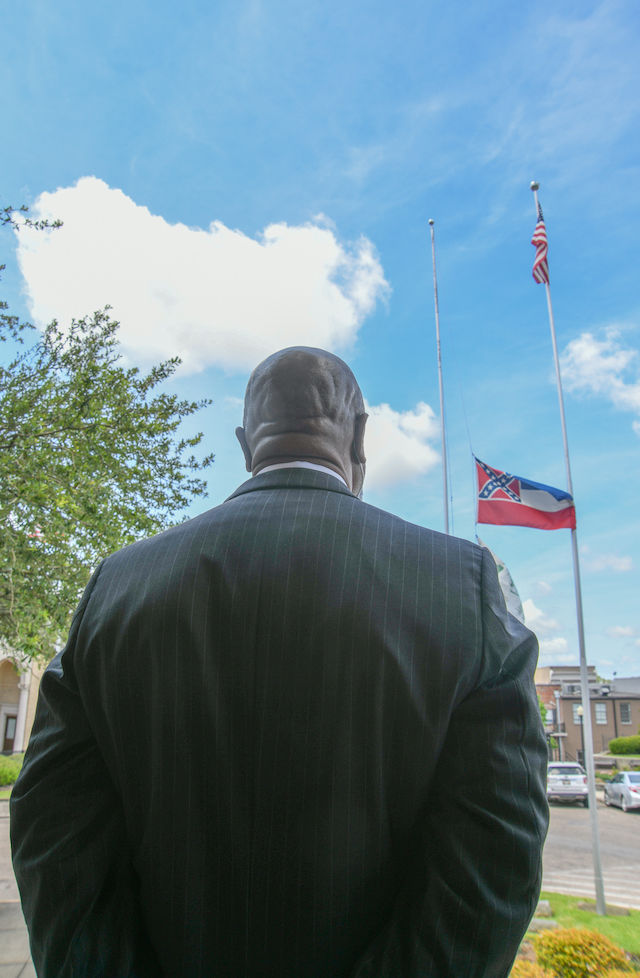 The state of Mississippi flag is lowered at Laurel City Hall. (Photo by Jack Hammett)

During the reignited debate on whether the flag sends racist messages, Laurel Mayor Johnny Magee signed an executive order on Tuesday to take down State of Mississippi flags from city properties. 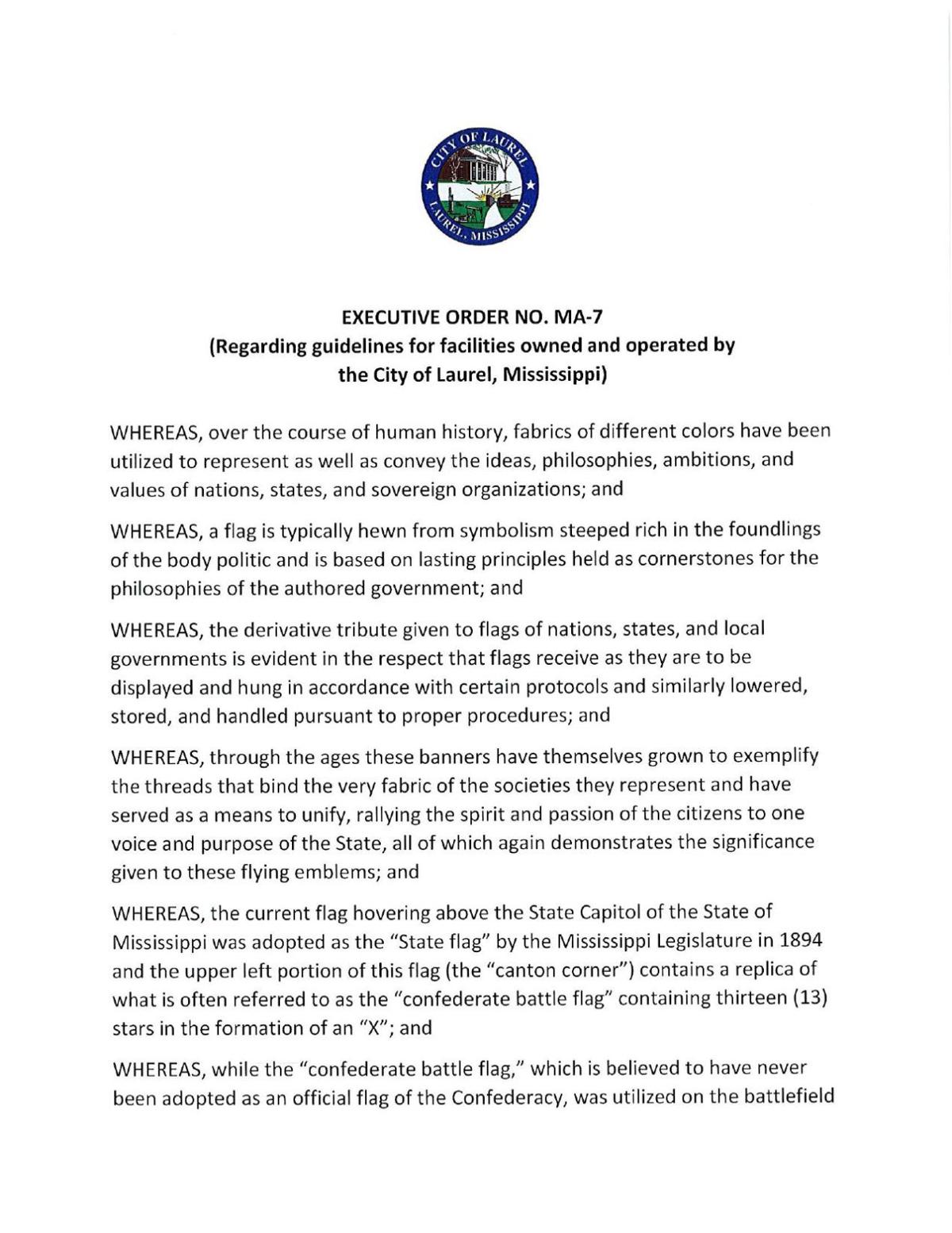 At a Tuesday morning press conference in the City Hall rotunda, Jimmy Walker, owner of Ford Lincoln Kia in Laurel, stood with an emotional Magee as the mayor read and signed the executive order. At one point, the mayor paused for a full minute as he held back tears. The executive order, effective the day of signing, calls for the flags to be donated to the library or other places that will keep them for posterity.

“Whereas through the ages, these banners have themselves grown to exemplify the traits that define the very fabric of the society they represent and have served as a means to unify, rally the spirit and passion of the citizens to one voice and purpose of the state, all of which demonstrates the significance given to these flag emblems,” Magee read. “And whereas the current flag hovering above the State Capitol of the state of Mississippi was adopted as the state flag by the Mississippi legislature in 1894, and the upper-left portion of this flag is often referred to as the Confederate battle flag.”

Magee went on to say the battle standard is a symbol of divisiveness and racial transgressions throughout the state’s history, “none of which represents the ideals and principles of our great nation, proud state and vibrant city.”

“There comes a point in time in the annals of history when it becomes necessary to redefine who a people are, and what a collection of these people represent,” Magee said. “It is the opinion of the mayor of this city that now is such a time.”

The mayor also supported changing the state flag in his executive order.

“Whereas the mayor of this city therefore petitions the legislature of the state of Mississippi to change the state flag previously adopted by the state in 1894, a time when there was still divisiveness in the land, and there was violence and hatred.”

Employees of the City of Laurel removed the flag from outside City Hall immediately after Magee’s conference. That included Victor, who didn’t want to give his last name.

“I think it’s good for the whole group, because when one is in pain, everybody’s in pain,” Victor said. “It shows to me that people care enough to take down something that is offensive. There comes a time in history when we have to move on, because times change. People change. We can’t do the same things we did in the 18th and 19th centuries. This is a new day.”

Victor hopes moves like this one will be positive in the long term.

“I hope that it unites us,” he said. “We’ve been segregated for too long. Maybe we can come together.”

Next door to City Hall, the state flag still flies at the courthouse, which is the property of Jones County.

“I believe that at some point people will want to change the flag, but it should be done by a vote of the people, not by a vote of politicians doing a backroom deal in Jackson,” Reeves said, responding to a bipartisan group of state lawmakers’ recent push to remove the flag’s Confederate emblem.

According to a poll of state legislators by Mississippi Today, 19 senators wanted to allow the legislature to change the flag, while 23 wanted voters to decide — including State Sen. Chris McDaniel of Ellisville. Four senators wanted to keep the flag. Sen. Juan Barnett of Heidelberg said he wanted a legislative change.

In the House of Representatives, 46 members said they wanted a legislative change, while 28 wanted the voters to decide and three wanted to keep the current flag. Forty-five members did not provide comment. Among those was Republican Rep. Donnie Scoggin of Ellisville. Rep. Omeria Scott of Laurel said she wanted legislative change.