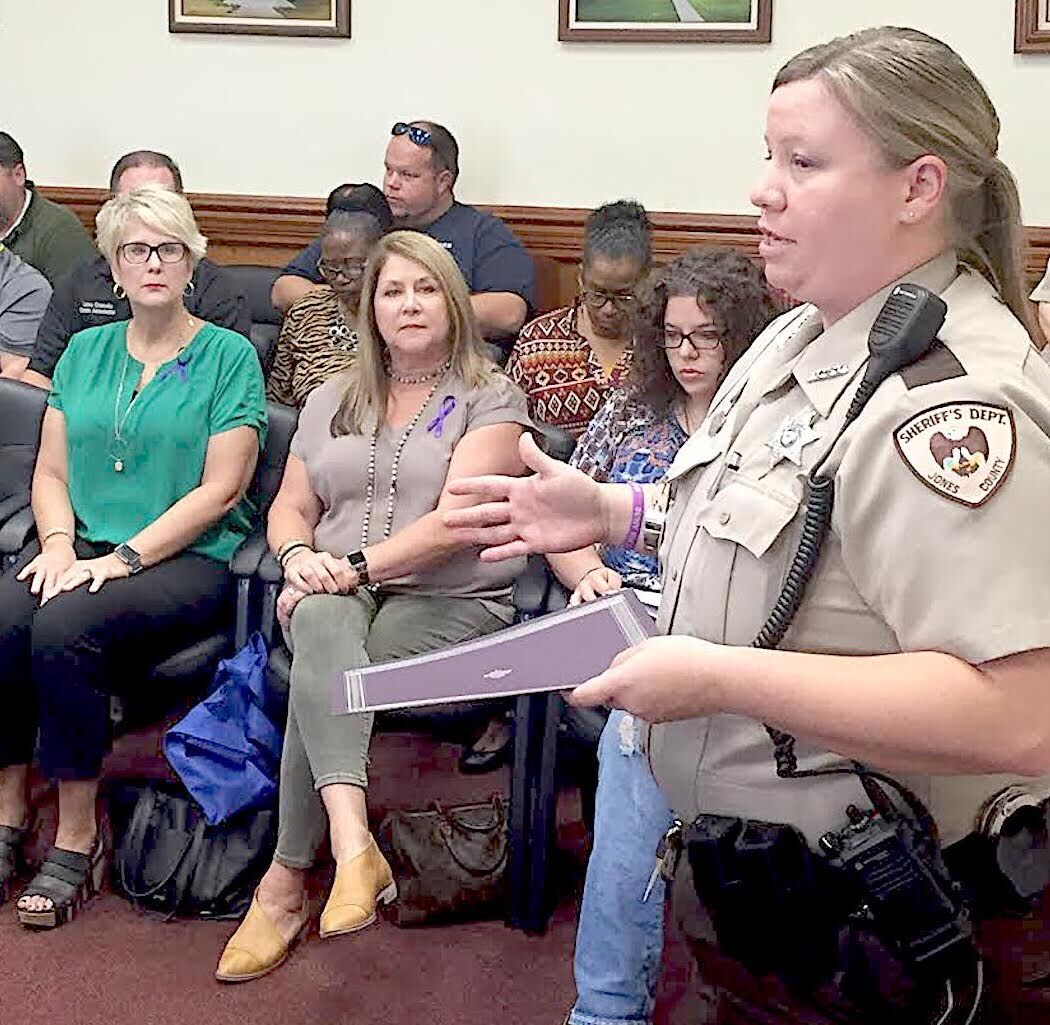 Priscilla Pitts speaks to the Board of Supervisors at the 2019 proclamation reading. Seated at left is DAFS executive director Becky Stewart. 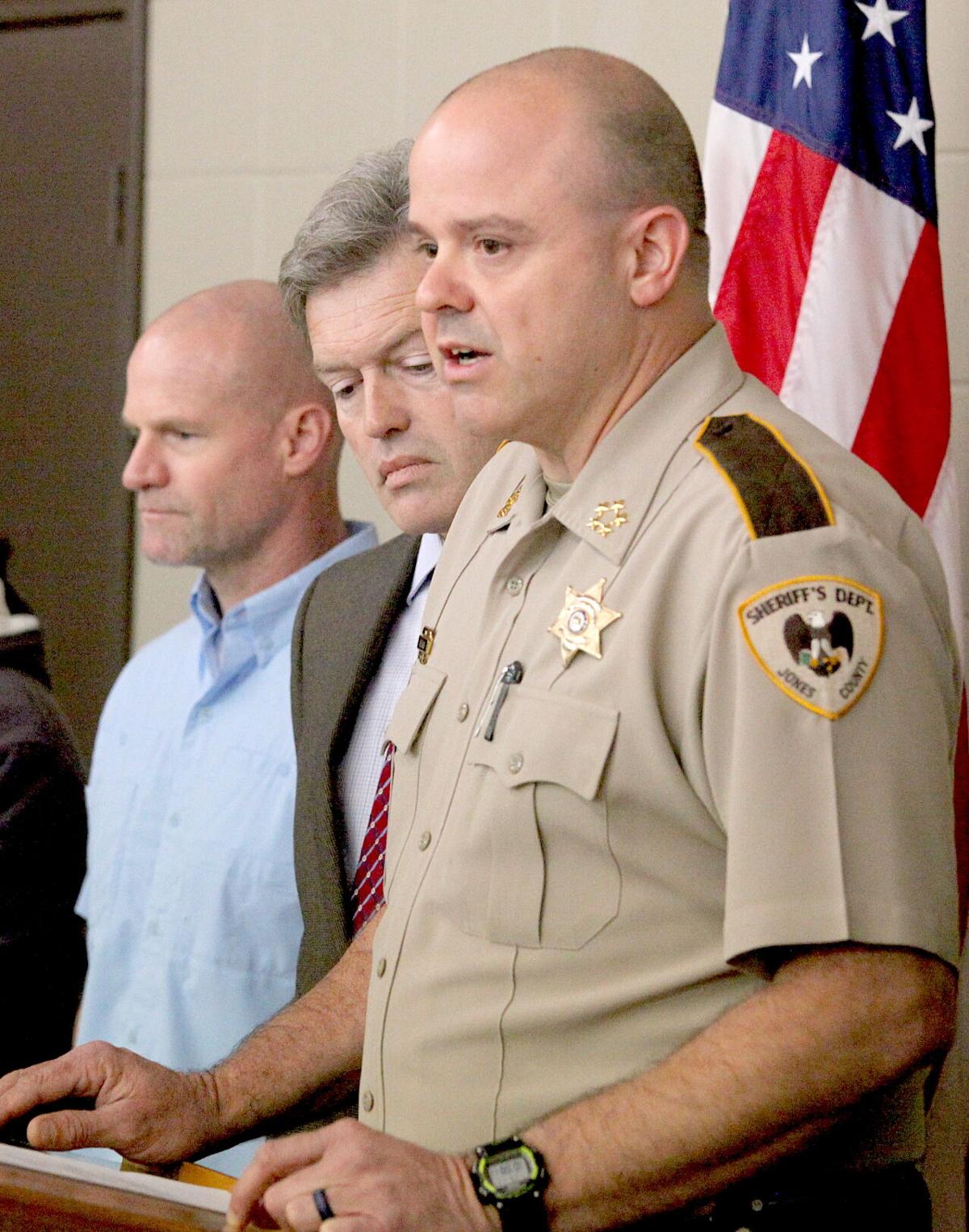 Domestic abuse isn’t new, but there is a new approach to battling the problem.

Law enforcement officials are being trained in LAP — Lethality Assessment Protocol — to use when they go on domestic-disturbance calls. Proponents of the protocol say, “3-1/2 minutes, 12 questions, save a life!”

CRISIS HOTLINE: The Domestic Abuse Shelter serves an 11-county area and professionals are available 24 hours a day at the Crisis Line 1-800-649-1092 for immediate assistance. Domestic violence victims can get information, law enforcement, medical attention, counseling and/or advocacy, free of cost, whether they require shelter or not.

The Jones County Sheriff’s Department has been trained in LAP and began using it on Oct. 1 to correlate with Domestic Abuse Awareness Month.

Becky Stewart, who is executive director of the local Domestic Abuse Family Shelter, expressed her appreciation to Sheriff Joe Berlin for adopting LAP in his department during a Board of Supervisors meeting this month.

“Thank you, Sheriff, this is what we’ve been working toward,” Stewart said. “This really can save a life.”

“We appreciate what the sheriff does,” he said. “He’s doing a fantastic job.”

JCSD victims’ advocate Priscilla Pitts and other law enforcement officers in area departments went through the training in February at the DAFS with Chief Luke Thompson of the Bryam Police Department serving as the instructor.

LAP is described as a tool for officers at the scene of a domestic call. The 12 questions are designed to determine if a victim is in imminent danger. The protocol is activated if the answer is “yes” to any of the first three questions or if the answer is “yes” to at least four of the next eight questions. Officers can use their discretion if they believe the victim is in danger or refuses to answer questions.

In any of those cases, the officer would contact the DAFS’ 24-hour hotline from the scene and brief the counselor on the situation, then put the victim on the phone. Officers then make arrangements to transport the victim to the shelter or help the victim make another pan of action. Victims are given options, such as the shelter, referrals or transportation to a safe place. They also receive a Victims’ Rights Packet, which includes information about violent crimes, resources that are available to them and their rights under the law.

Stewart emphasized the importance of going through the protocol at the time officers go on the call.

“Research indicates that if an officer arrives on the scene of a domestic call and hands a victim a card to call for help the next day, victims reach out to shelters and advocates only 3 percent of the time,” Stewart said, adding that she hopes to increase that to 50 percent with LAP. “The goal of the Domestic Abuse Family Shelter is to provide victims a choice when it happens. Many victims will not choose to come into our shelter, but they will be given the appropriate resources.”

Victims’ advocates can will follow up with the victims after the LAP has been documented.

Stewart said that LAP has been around and has been proved effective, but too few departments use it. That’s why she was glad that Berlin decided to make it policy for the JCSD. It’s been needed in the last few months, with so many people “trapped in their homes,” some in abusive situations, during COVID-19-related lockdowns, she said. “Things have been bad out there.”

DAFS, which serves an 11-county area, received its annual $8,000 contribution from the Board of Supervisors this month.

“Your support means more than you know,” Stewart said.

The DAFS will also participate in a social-media campaign on its Facebook page and Stewart asked people spread the message on social media and wear purple every Friday in October. But most of all, she wants people to listen and refer victims of domestic violence to the DAFS and “be a voice for the voiceless.” That’s needed now more than ever because of the circumstances, she said.

“Around the globe, governments have implored residents to stay home to protect themselves and others from COVID-19,” she said. “But for domestic violence victims — the vast majority of whom are women, children and LGBTQ+ individuals — home is a dangerous place.”

Deborah Warren, who is victims’ assistance coordinator for the Jones County District Attorney’s Office, is asking everyone in the community to join the Light in the Window Campaign by putting a candle or light in a front window form 6-10 p.m. each evening in October. She also asked that people wear purple ribbons to raise awareness and go to social media with the theme “#1Thing.” Part of that campaign includes snapping a selfie on Thursday, Oct. 22 and sharing it on social media with the hashtag.