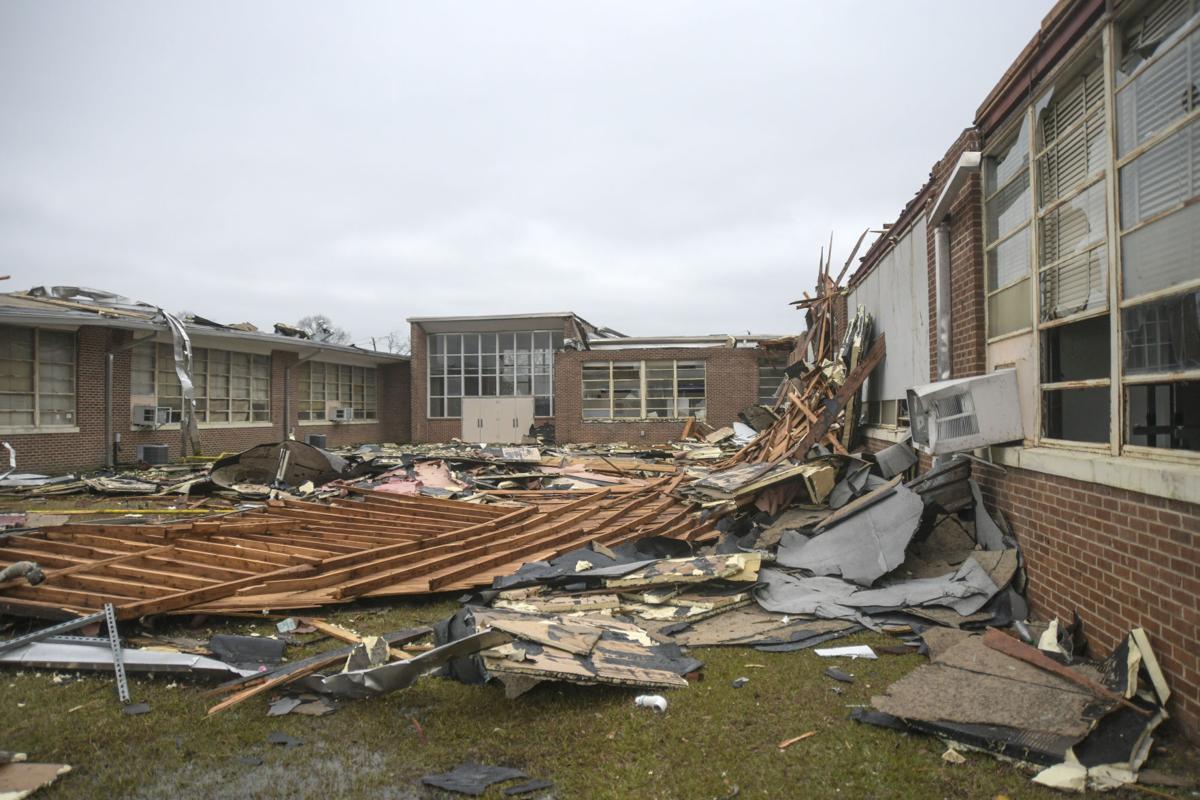 Nora Davis’ debris, which was strewn across the campus after a tornado hit late last year, has since been cleaned up by the school’s mitigation crew. The restoration process will be slow but steady, said Lacey Slay, district spokeswoman. The district still plans to move ahead with its plan to create the Nora Davis Family Interactive Center, though the completion window for the facility will be pushed back to an undetermined time. (Photos by Jack Hammett) 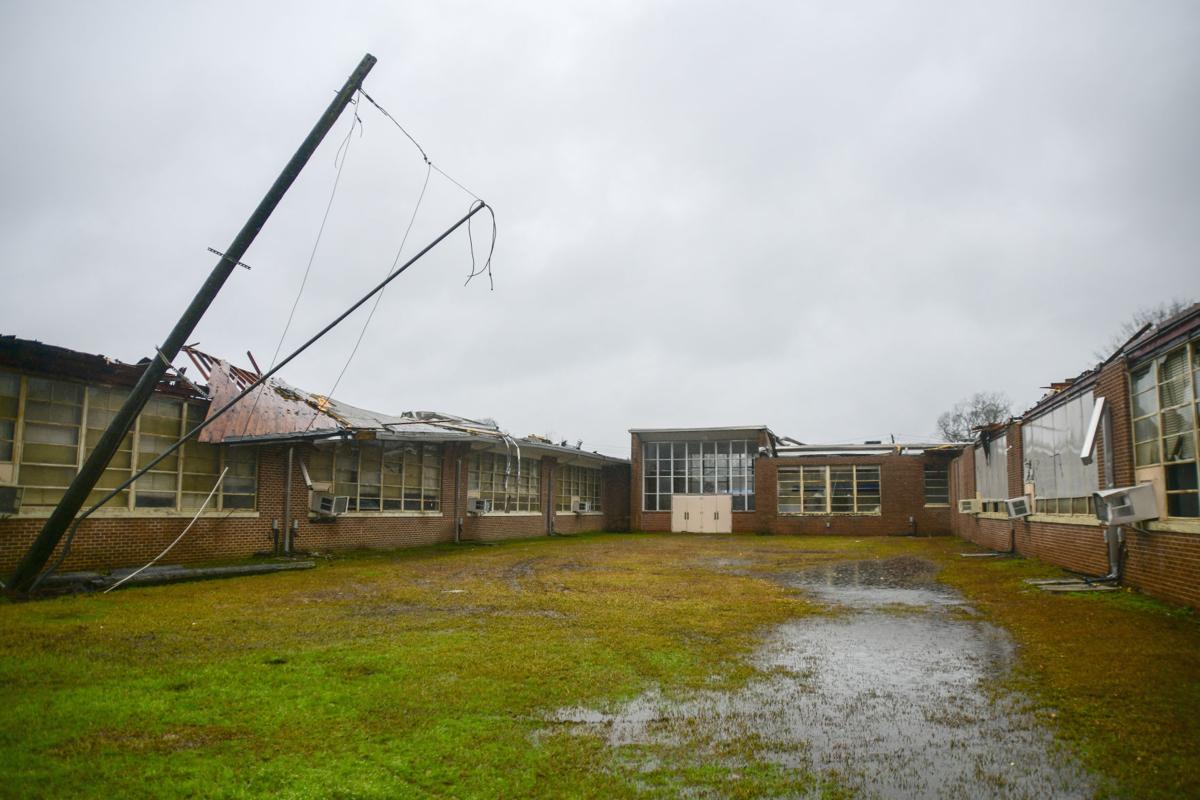 Nora Davis’ debris, which was strewn across the campus after a tornado hit late last year, has since been cleaned up by the school’s mitigation crew. The restoration process will be slow but steady, said Lacey Slay, district spokeswoman. The district still plans to move ahead with its plan to create the Nora Davis Family Interactive Center, though the completion window for the facility will be pushed back to an undetermined time. (Photos by Jack Hammett)

When a tornado cut a scar across the Laurel landscape in December 2019, there was little talk of opportunities the disaster would present. But the recovery process has changed that.

Cleanup has progressed in the last month or so such that Nora Davis Magnet School — which sustained some of the worst damage in city during the Dec. 17 storm — is now unrecognizable from the morning after the destruction.

Two of the biggest questions regarding the school have been answered: Yes, the district will restore the damaged buildings, and yes, the Family Interactive Center will still be constructed.

On a rainy January morning, district spokeswoman Lacey Slay stood beneath the cover of Nora Davis’ front awning. Yellow tubes ran from the entrance to a truck outfitted with a humming dehumidifier. Walters pointed to the equipment.

“These went up a few days after the tornado hit,” she said. The equipment is meant to draw remaining water from salvageable items, many of which were saturated when the tornado tore through two buildings’ roofs. “They’ll be here until the restoration’s end process.”

The cleanup crew has thus far cleaned the debris from the campus, cleared out damaged items and catalogued what’s left. Around back, where landslides of roof and rubble once were, the grass is bright and clean. But power poles and lines still lean. Uprooted trees still lie where they fell.

“It’s all going to take some time, of course, but we’re excited for what the future holds,” Slay said. “We’re working to finalize the damage reports with the insurance company and figure out what our next steps are going to be.”

Before the storm, the school district had started renovating and forming partnerships in preparing to create the Nora Davis Family Interactive Center. The original opening date for the facility was this summer.

When asked if the district still had plans to go through with the project, Slay said, “Oh, absolutely.”

The facility will be home to a family resource center, interactive learning rooms, a computer lab, after-school tutoring programs and adult education, to name a few features.

“It’s really going to cover education that sometimes doesn’t fall in the realm of school hours,” Walters said. “It’ll have additional resources to help someone make a resumé, apply for jobs online and just provide lots of resources to work with our early school children. It’ll give us an opportunity to work with local head-starts and daycares. It’s not just for students, but for the whole city.”

According to a press release from the Laurel School District, the Gardiner Building, Stewart M. Jones Campus and other locations also sustained damage in the storm. Trees around the Gardiner Building — where the district offices are located — were knocked over. The building will need a new roof. The Stewart M. Jones building on 5th Avenue received damage to its roof, awning and door.

“The recovery phase will take some time, but as with all challenges and disasters we have faced, we are a community of resilience, and we will come back stronger and better for the future of the children of Laurel,” said Superintendent Toy Watts.

“Laurel is a resilient place, and the community always pulls through to do what needs doing after something like this happens,” Slay said.

The City Beautiful received plenty of damage to its public property. Lorenzo Anderson, public works director, said trucks have hauled more than 200 loads of debris out of the city. City property took an estimated financial hit of $300,000, and that estimate doesn’t count private property.

“We’re working overtime to help clear debris,” Anderson said. “We have other communities like Jasper and Hattiesburg helping. Now we have it at a manageable level.”

Businesses affected by the storm have a lot of hope as well. Pine Belt Credit, whose building was a total loss, was up and running within several days. Its staff was quickly back to work in a rented space across the street.

“If the tornado affects our business in any way, it’ll be positive,” said assistant manager Brittani Smith. “We’ll have more room and get to lay out (the rebuilt office) how we want.”

The building was previously home to a State Farm office and a weight-control clinic. The nearby Trustmark Bank was also a total loss, but attempts to reach its corporate office were unsuccessful.