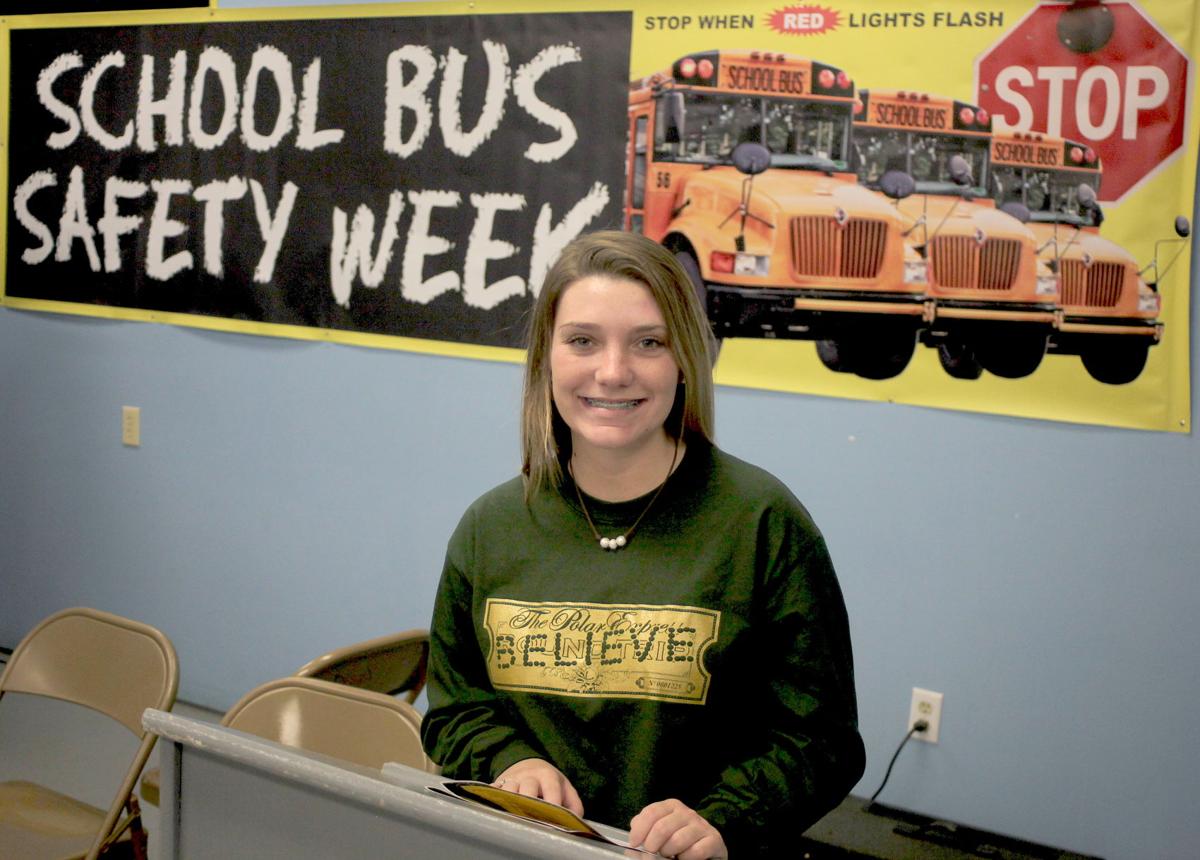 Tessa King followed in the footsteps of her parents, speaking on behalf of school bus safety after witnessing her baby brother being killed by a driver who passed the bus they were getting off of in front of their home in 2009. (Photo by Mark Thornton) 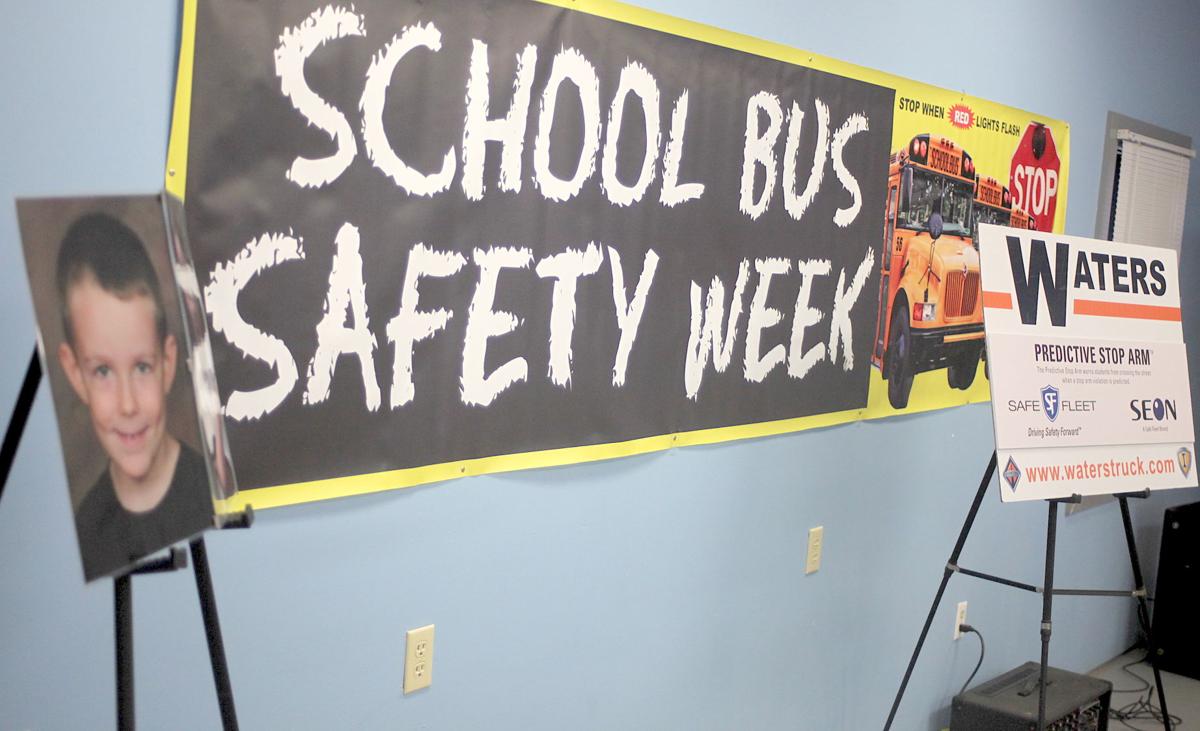 A photo of Nathan Key that was on display showed the tragic reason that school bus saftey was brought to the forefront in Jones County in 2009. 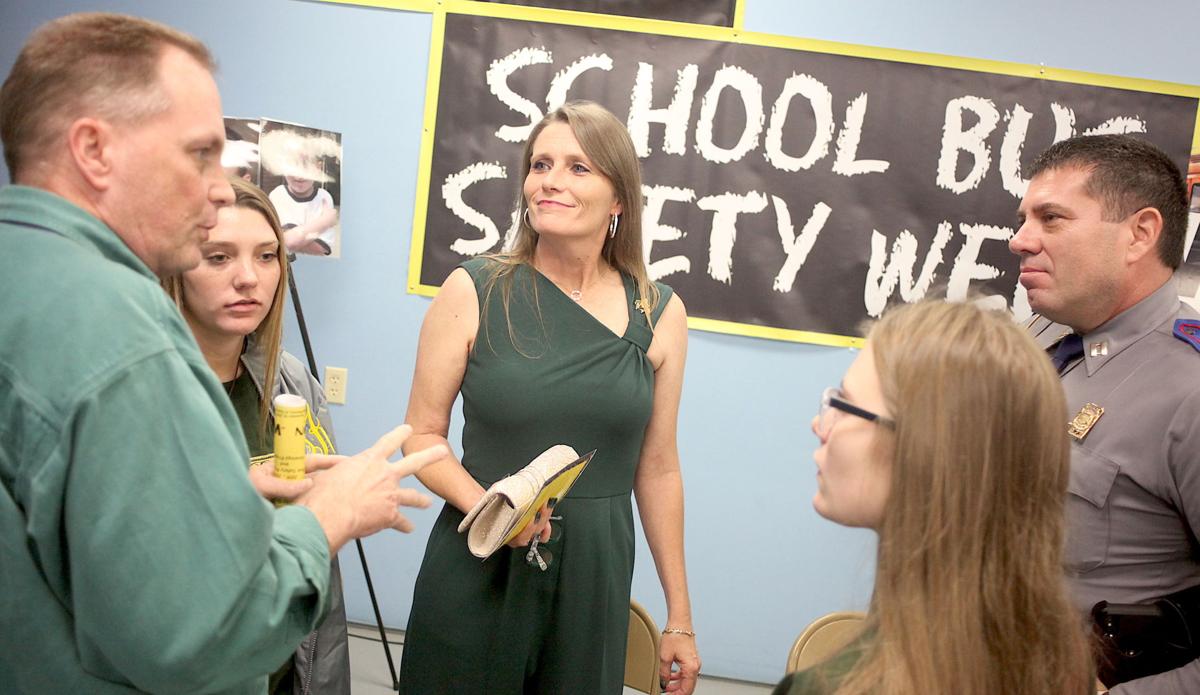 Tessa King followed in the footsteps of her parents, speaking on behalf of school bus safety after witnessing her baby brother being killed by a driver who passed the bus they were getting off of in front of their home in 2009. (Photo by Mark Thornton)

A photo of Nathan Key that was on display showed the tragic reason that school bus saftey was brought to the forefront in Jones County in 2009.

Tessa King was standing there when her little brother Nathan Key, 5, was struck and killed by an SUV as he got off the bus in front of his home on Houston Road 10 years ago.

And she stood before the New York Legislature when she was 15 and told of what happened that afternoon in Jones County, when she was 8. Her emotional story was one of the factors that eventually led that state to become the 14th in the country to pass a law that bears her brother’s name.

“I remember every detail of what happened that day,” said King, now 18 and working as a clerk in the emergency room at South Central Regional Medical Center. “I try not to talk about it because it’s so sad … I think about the children that have been saved because of him. He has helped save so many other kids. I’m thankful I have parents who were strong enough to take their loss and use it to try to save others.”

Nathan’s mom and dad, Lori McJohnson and Andy Key, with the help of state Sen. Chris McDaniel, worked with the Mississippi Legislature to pass Nathan’s Law, which enhanced the penalties for motorists who pass loaded school buses and increased safety measures for buses and drivers.

“The penalty for passing a school bus then was less than for littering,” McJohnson said. “I was angry that my child’s life was worth less than throwing a piece of paper on the ground.”

That realization turned her from a grieving mom into a mother on a mission. And because of that, the Jones County School District is now at the forefront of school bus safety.

That’s why a cutting-edge safety feature was unveiled at the JCSD bus barn on Hillcrest Drive on Tuesday, the eve of the 10-year anniversary of little Nathan’s death. The Predictive Stop Arm uses radar technology and predictive analytics to determine if a vehicle is about to pass a bus when its stop-arm is deployed. A loud voice over a speaker warns, “Danger, get back,” and at the same time, a long rail from the front of the bus comes out to serve as a barrier between students getting off the bus to walk toward the open lane of traffic.

Representatives from manufacturer Safe Fleet and one of its brands SEON, as well as bus manufacturer Waters Truck and Tractor, were on hand with local and state officials.

“A lot of safety equipment is reactive, but we need proactive equipment … to keep kids out of harm’s way,” said Mike Schulte, president of Safe Fleet. “Jones County is taking the lead in Mississippi and across the United States.”

A Jones County bus that’s equipped with the safety feature was used in a demonstration for officials. The cost of each unit is $2,500. The JCSD fleet includes 124 buses on regular routes and 14 buses for students with special needs. Equipping all of them with a Predictive Stop Arm would cost almost $350,000.

“We don’t want cost to be the only factor, but it is a factor,” JCSD Superintendent Tommy Parker said. “No cost will prevent us from trying to be proactive.”

There is no immediate plan in the works to purchase the high-tech stop arms for the rest of the buses.

Terry Graham, who is transportation director for the school district, said, “We’re hoping maybe we can get some sponsors. As time goes on, we’re hoping that companies competing will lead to a reduction in cost.”

For instance, the cost of cameras that automatically snap a photo of a vehicle that passes a stopped bus has gone from $2,000 to $1,200 in a couple years’ time, Graham said.

It’s possible that new buses will be ordered with the Predictive Stop Arm and it could become standard equipment eventually, he said.

“The product should not take the place of the procedures that we’ve put in place,” McJohnson said. “It’s just an extra step.”

Training the drivers who share the roadways with the buses is another matter. An estimated 3,700 drivers pass stopped school buses in Mississippi every day — 17 million last year across the country — according to statistics recited by McJohnson and Schulte, respectively.

Seeing the number of people who continue to pass stopped school buses despite a decade of crusading for the cause is “disheartening,” she said. “But it is positive to know that they’re being held accountable.”

Distracted driving is the No. 1 reason for the passbys and crashes, said Johnny Poulos, spokesman for the Mississippi Highway Patrol.

“I get upset, frustrated, angry when I hear of a crash involving a school bus,” he said. “They’re transporting the most precious commodity we have."

Nathan was killed in 2009 and Nathan’s Law was passed in 2011. In Jones County, 21 people were cited under the enhanced penalties that first year. Last year, there were 11, and there have been four so far this year, Graham said.

“I’d like the people of Jones County to know that we’re watched around the nation and seen as a model for other school districts when it comes to school bus safety,” McJohnson said, thanking Parker, Graham and his staff for that. “We’re one of the few school districts that’s being proactive.”

McJohnson, Graham and Poulos are all part of a School Bus Safety Task Force that was established by Gov. Phil Bryant after Nathan’s Law passed. McJohnson and Key and their children have gone around the country to speak to different states’ governing bodies to push for tougher laws for motorists who violate traffic laws around stopped buses. McJohnson also regularly goes around the state assisting with safety programs.

She became the director of transportation for the Greenville School District, where she learned all she could about working on and with buses.

“I crawled under them and changed the oil … looked at leaf springs … did routing,” she said. “Now I’m back home.”

She said she is proud that school bus safety is “a priority in this district.” More than a dozen young students were recognized for artwork in a School Bus Safety Week poster contest, in which there were almost 3,500 entries from grades K-4. The top four grand champions won cash prizes ranging from $75 to $200. (See them in an upcoming Bobcat Jr.)

Nathan’s Law requires all motorists to stop at least 10 feet from a bus when it’s loading or unloading children and forbids them from proceeding until all children have crossed the street or gotten on the bus, the flashing lights are off and the stop arm is retracted. The fine for passing a stopped bus was increased and anyone who passes a bus and causes injury or death can be charged with felony assault and sentenced to up to 20 years in prison. The law also authorized the addition of cameras to buses and added 10 questions to their driver’s license test and forbids them from using “personal digital assistants” while operating a bus, except in emergencies.

Even with all that, McJohnson summed up the best way to avoid tragedy with a school bus: “Just stop when you see a school bus with the stop-arm out flashing. When it’s up, move forward, and all the children will remain safe.”

Rep. Donnie Scoggin (R-Ellisville) said that he drove a 1965 school bus for South Jones as a second job in 1980-81, so he knows how big of a responsibility it is. He said the Legislature is “aware of issues out there with inattentive drivers” and is “looking to tighten laws” against texting and driving.

McJohnson, King and her brother Louis (now 21), along with school bus driver Suresia Patrick and numerous children on the bus, will forever have etched in their memory the sight of the North Jones Elementary kindergarten student being struck then run over by Dominic Gebben in a Nissan Pathfinder, then fleeing the scene. McJohnson was in one of the stopped vehicles waiting on her children to get off the bus that Friday afternoon. She saw two of her children kneeling on the side of the road and “a little pair of little black boots, and then I knew it was Nathan,” she testified.

King said she remembers her baby brother as “the light of the show, everybody’s favorite.” And even though she is proud of all the children who have potentially been saved by the family’s work, this time of year is tough, she admitted.

“Christmas is hard,” she said, standing with 14-year-old sister Elizabeth. “It’s become a tradition for all of us to go see Polar Express. That was his favorite movie. It helps.”

In June 2012, a Jones County jury found Gebben guilty of culpable negligence manslaughter and leaving the scene of an accident in Nathan’s death. Then-Judge Billy Joe Landrum sentenced him to the maximum, 22 years in prison. Gebben was released last spring, according to a notification that was sent out by the Mississippi Department of Corrections to Nathan’s family.

The JCSD settled a lawsuit that Nathan’s parents filed in 2012 for an undisclosed amount of money.