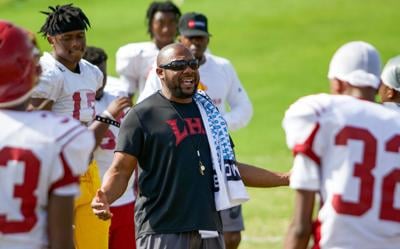 Twenty-one years. That is how long Laurel’s first-year head football coach Ryan Earnest says he has awaited the opportunity to lead his alma mater into the “Battle for the Lil’ Brown Jug” against the rival Hattiesburg Tigers. Friday night at D.I. Patrick Stadium, Earnest will finally have the opportunity to fulfill that dream.

Like many other public events scheduled for 2020, however, numerous obstacles had to be overcome in order to make the 99th chapter of Mississippi’s longest continually played football rivalry game possible to play. At one point in August, the game was even canceled due to schedule changes imposed by the MHSAA in an effort to prevent the spread of COVID-19.

Like anything else worth having, however, this opportunity was worth fighting for.

“This rivalry is something very special,” Earnest said after announcing that the two schools had succeeded in rescheduling the contest. “It survived Hurricane Camille, it survived Hurricane Katrina, it even survived World War II. So it was really, really important to us and really important to our two communities that we were able to get this game in, and we’re both really excited that we get to continue this rivalry.”

But the battle did not end there. Uncertainty over crowd limits for high school sporting events continued to loom during the weeks leading up to Week 1 of the regular season, even forcing several school districts throughout the state to cancel their football seasons. Hattiesburg head coach and Athletics Director Tony Vance, equally as passionate about preserving the storied rivalry, worked swiftly with school district officials to implement plans and procedures that would allow the Tigers’ home games to be played while protecting the health and safety of all participants involved.

“I just hope people will understand that we’re fortunate to be able to play football right now,” Vance said Tuesday. “So we’re not going to complain that we won’t have a full crowd up there cheering for us. That’s just part of it. We’re able to play, so we’re just going to have to create our own excitement and our own energy.”

Both the Tornadoes and Tigers have been hard at work preparing for what many of the players consider the most important game of the season.

For Laurel, many of the same players who helped the team reclaim the Jug last year for the first time since 2014 will be back on the field again Friday. Dandy Dozen wide receiver Kanarius Johnson will be featured once again as the biggest target in a high-powered passing offense. Dexter Scott, the Tornadoes’ 6-foot-3 signal-caller, returns with heightened expectations and poise after leading the Tornadoes as a starter in their final five games of the 2019 season.

As for Hattiesburg, the main issue will be a general lack of experience. Most of the contributors from the Tigers’ 2017 5A South State title team have graduated and advanced to higher levels of competition, leaving talented but young teammates behind to fill the gaps and carry the program forward. Hattiesburg finished last season with a 4-7 record, missing the playoffs for the first time in Vance’s coaching career. However, Vance said the early ending to the Tigers’ season allowed them to spend extra time in the weight room training to better themselves for the season ahead.

Friday night, Laurel will be fighting to lay claim to the Jug for the 50th time in school history, as the Tornadoes currently lead the all-time series with 49 wins, 44 losses and 5 ties. Hattiesburg, on the other hand, will be fighting to rekindle the momentum they have had in the rivalry under Vance’s guidance, seeking its fifth win in eight years since he became head coach of the program.

Having overcome so much to make this 99th chapter possible, the Tornadoes and Tigers will line up for Friday night’s 7 p.m. kickoff with only one thing on their minds — seizing the opportunity earn one more year of bragging rights for the schools and communities that fought so valiantly to keep the Lil’ Brown Jug rivalry alive.