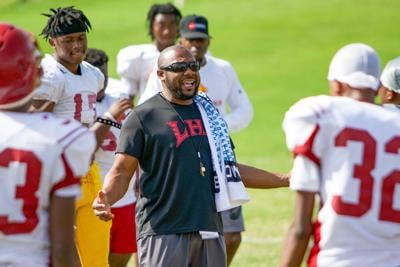 The Laurel Tornadoes and Wayne County War Eagles have met three times in the postseason over the last six years, including back-to-back 5A South State title games in 2014-15. However, the circumstances surrounding their next meeting on Friday night will be a little different from what fans have grown accustomed to seeing. This time, the two local rivals will take the field with 0-2 records.

This will be the first home game of the year for the Tornadoes, who faced two tough road trips against Forrest County foes Hattiesburg and Petal to start the season. The offense has faced its fair share of setbacks, resulting in only 12 points being scored in each of its two losses. Though the defense has held its own for long periods of time, untimely turnovers have allowed opponents to take advantage of good field position and rack up 35 or more points in each outing.

The load of seasoned junior running back Kiron Benjamin has increased each week, leaving him accountable for three of the team’s four touchdowns so. Rushing yards will be high in demand on Friday against a War Eagles’ defense that zoned in on that area last week and held the West Jones Mustangs to 58 yards on the ground after giving up 278 to D’Iberville the week before.

Wayne County enters this week in a very similar situation to Laurel, having shown flashes of brilliance on defense but struggling to sustain success on the offensive side of the ball. The War Eagles forced five turnovers in last week’s contest against the Mustangs, but their offense was held scoreless, despite fighting its way inside the 1-yard line midway through the fourth quarter. The unit was held to 105 total yards, 58 of which came on a third-quarter run by senior Kelnevious Walley. Contrary to the Tornadoes, the War Eagles will be hitting the road for the first time this season in hopes of returning to Waynesboro with a much-needed momentum boost to carry into Region 4-5A competition in Week 4.

The Tornadoes and War Eagles have met 25 times since their first matchup in 1993, with Wayne County winning 13 and Laurel winning 12. Their most recent meeting was last September, in which Wayne County won a hard-fought home game in second overtime, 21-20. Both teams still have high hopes for what can be accomplished in 2020 and will muster up as much pride as they can to come away with a victory between the bricks on Friday.