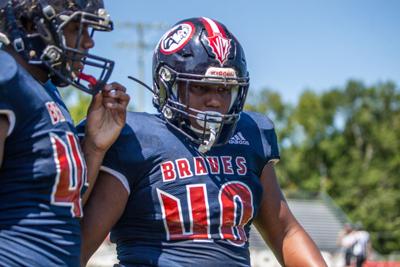 The South Jones Braves (0-1)  will be on the road Friday night for their second official game of the season against the Vancleave Bulldogs after competing in a jamboree against Northeast Jones in Week 2 of competition.

Though they lost their opener on the road against West Lauderdale, the Braves’ offense showed signs of new life in its first game under new head coach Todd Breland, scoring 28 points against a defense that held them to just 14 points a year ago. In last week’s jamboree, the Braves came away with a 14-0 victory over Northeast Jones, thanks in part to big plays made by senior wide receiver BJ Hawthorne. The biggest challenge moving forward for the Braves will be on the shoulders of the defense, which surrendered 49 points in its first official game and allowed 35 points to Vancleave last season in Ellisville.

The Bulldogs (1-1) are riding high entering Week 3 after earning their first win of the year last Friday against Long Beach, 27-7. Their season-opener against East Central (2-0), which earned a spot in last year’s 5A playoffs, went down to the wire and ended with a close 31-29 victory for the Hornets.

Friday’s game will be the fourth to be played between South Jones and Vancleave since the two teams first met in 2011. The Braves lead the series 2-1, although the Bulldogs came out on top last year with a 35-10 victory in Ellisville.