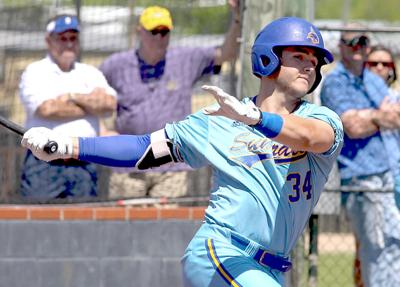 Many of Graham Crawford’s earliest memories on the baseball Diamond were made in Jones County, where he was a member of a couple of Laurel-Jones County Dixie Youth World Series teams. Wednesday afternoon, the soon-to-be 20-year-old Crawford announced he will be continuing his collegiate baseball career at the University of Alabama, where he hopes to make more fond memories as a member of the Crimson Tide.

Crawford, the son of Trey and Barron Crawford, is a standout catcher and switch hitter who graduated from Sumrall High School in 2019. As a senior, he batted .330 with nine homers, six doubles and 49 RBIs and led the Bobcats to a 4A South State championship.

Crawford has since been at Pearl River Community College, where he and the Wildcats were off to a hot start before the season got canceled due to the coronavirus pandemic. As a freshman, he hit .280 with two home runs, four RBIs and five runs scored through nine games.

Crawford said his decision to join the Wildcats was very worthwhile, and he and his teammates believe they could have accomplished big things together in 2020 if given the opportunity.

“PRCC is the place to be, no question,” Crawford said. “Every guy here will tell you the same thing. We all love it and wouldn’t trade it for the world. As for the year, it’s definitely different, but I think we’ve handled the adversity, and we make the best out of it everyday. All the returners feel like we got a special year taken from us last year, and we are all chomping at the bit to get back out there and play.”

Concerning his future with the Tide, Crawford said he felt early on in the recruiting process that Tuscaloosa was the right place for him to continue his career, competing with a program that has high aspirations for the near future and believes that he could ultimately play an important role in their climb to success.

“They were the team I started talking to back in June,” Crawford said. “Me and Coach (Jerry) Zulli made a great connection from the beginning. I feel like being a switch-hitter helped me a ton, as well as (my) throwing (abilities) and knowledge of the game.

“Tuscaloosa just felt like home for me, and all the players and coaches believe that they will be playing in the (College World Series) in June, and that’s been a dream of mine ever since I started playing baseball.”

As for now, Crawford is still working with his teammates at PRCC, anticipating the opportunity to show fans what they missed out on seeing when the 2020 season was cut short. Though the offseason has been much longer than usual, Crawford said the process of preparing to play remains the same in Poplarville.

“Our routines don’t change because we all believe that what we do works,” Crawford said. “We get after it every single day, just waiting on our first game. Everyone has bought into the process and believes in what we do.”