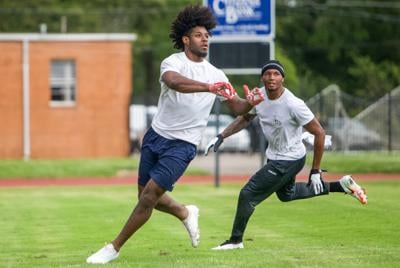 With the unusual circumstances surrounding the 2020-21 season, NCAA officials decided to give student-athletes an extra year of eligibility. Earlier this week, Ole Miss began rolling out the names of seniors who have chosen to return next fall for one more season with head coach Lane Kiffin and the Rebels’ football team.

Among those to already announce their plans to return is Laurel High School graduate Dontario Drummond, who stepped into a significant role for the Rebels’ receiving corps in 2020 and hopes to expand on that success in 2021.

As a senior, Drummond caught 25 passes for 427 yards and seven touchdowns, finishing as the team's third leading receiver in its first year under Kiffin.

Drummond appeared in all 12 games as a junior in Oxford and made nine starts for the Rebels. He finished third on the team with 13 catches for 188 yards. Drummond was a consensus 3-star JUCO prospect after two seasons at East Mississippi Community College, where he was selected as a first team NJCAA All-American following his sophomore campaign. The 6-foot, 200-pound receiver had 95 receptions, 1,466 receiving yards, and 21 touchdowns over the course of two seasons in Scooba, making him the EMCC’s all-time leader in receptions and receiving yards.

Drummond helped lead his team to national titles in the 2017 and 2018 before choosing Ole Miss over Arkansas, Kansas, Colorado State, and Arkansas State.

Speculation of Drummond’s return for another season began when he and several other senior Rebels chose not to participate in Senior Night activities leading up to the Egg Bowl on Nov. 28.

Brown punted 27 times this season for an average of 46.6 yards per kick. He was perhaps the most surprising of Wednesday's announcements and is certainly a welcome return to the 2021 roster.

Ole Miss finished the 2020 season with a 5-5 overall record and a victory over No. 11 Indiana in the Outback Bowl.