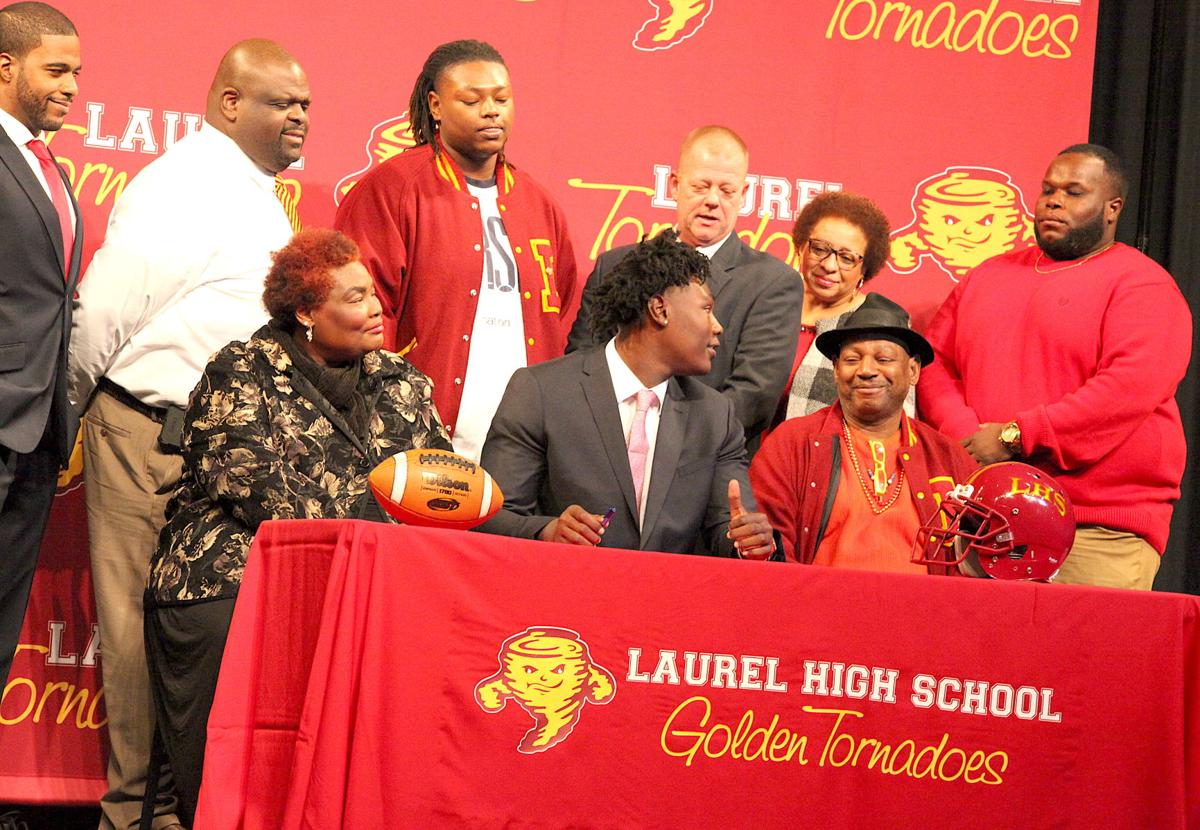 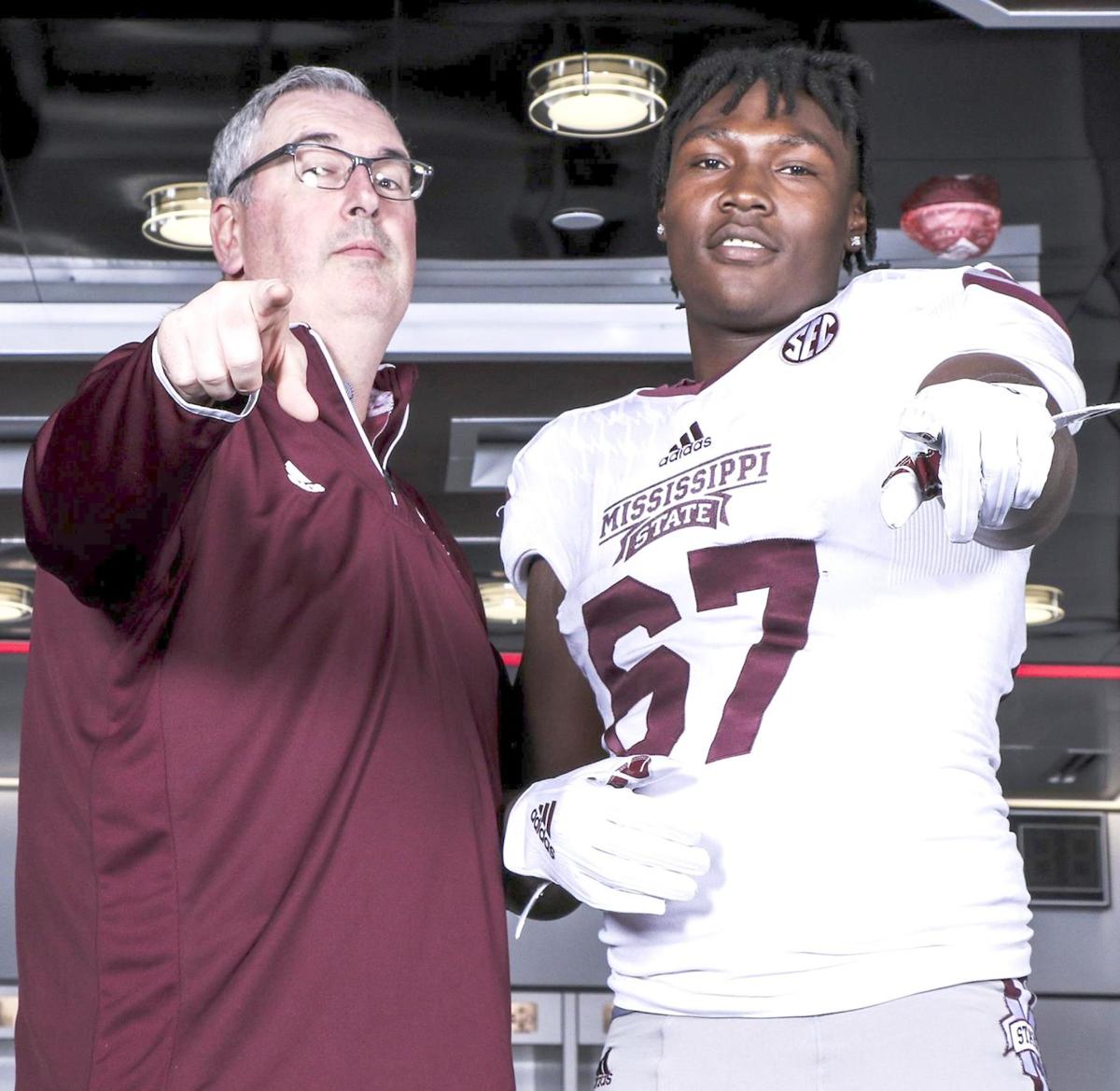 Laurel High’s top recruit crossed out his commitment to Florida State and is crossing back over state lines to stay home.

Charles Cross, a highly recruited 6-foot-5, 270-pound offensive lineman, made his commitment to Mississippi State official on the first day of the early signing period by putting his signature on a letter of intent in front of family, coaches, teammates and classmates on Wednesday morning.

“We’ve been recruiting Charles for a little more time because he’s in-state and we’ve known about him for a long time,” first-year MSU coach Joe Moorhead told the Columbus Dispatch. “We just continued to stay in contact with him, he made his decision to reopen his recruitment and we didn’t have to change anything from what we had been doing the entire time. We just had the opportunity to get him up on campus, get him on an official visit and what we had to offer matched his criteria.”

And that visit is what made the difference for Cross.

“It felt like a real family environment,” he said, “and I was comfortable with it. I enjoyed my visits there. They care about their players. The future is bright.”

Cross said his recruitment has been an “interesting process,” and he’s content with his decision.

His family and coaches were also happy that he is staying in state to play so they can see him play more often, and Cross was happy to not cross state lines, too.

“I’m happy to be able to stay in the state,” he said. “I love Mississippi ... I’ll keep representing.”

Cross will make the Bulldogs proud that he had a change of heart, too, Laurel coach Todd Breland said.

“He’s a humble young man and he takes care of his business, on and off the field,” Breland said. “He will represent us well. Mississippi State got a great one today.”

Cross is just as “strong academically” as he is against opposing defensive linemen, Breland said, with a 3.6 grade-point average. Because of that, he has qualified for early enrollment at MSU, a move that often gives recruits a leg up when it comes to adapting to college life and the program.

More than 20 Division I schools came calling on Cross, including Alabama, LSU, Southern Cal and all of the in-state teams.

“We’ve had a lot of players recruited from here,” Breland said, “but nothing like this. When you’re one of the nation’s best offensive tackles, there are not a lot of those type players. They’re special. He’s one of those once-in-a-career players.”

Cross verbally committed to Florida State after his visit there last July. He was the Seminoles’ only offensive tackle to commit in the 2019 class. He is the 19th ranked tackle in the Class of ’19, according to at least one recruiting service.

“When it gets closer to signing day, it becomes more real,” Breland said of Cross’ crossover from FSU to MSU. “He put a lot of thought into the process. I’m certain that he made the right decision for him.”

Cross helped lead Laurel to a 10-4 finish and was one of the main reasons that the team transitioned from a pass-happy offense to a run-first team that averaged 222 yards per game on the ground.

He played in the Mississippi-Alabama All-Star Game in Montgomery, Ala., on Monday night, helping the Magnolia State to a second straight victory, 24-20.

And if things go the way he plans, it won’t be the last time he plays on Monday night. The NFL is the “ultimate goal,” he said.

Cross has been selected to play in the All-America Bowl in San Antonio on Jan. 5. In the 19-year history of that game, which features the 100 top-rated players in the country, about 400 selectees have gone on to play pro ball. Some of the more famous alumni include Andrew Luck, Adrian Peterson, Ezekiel Elliott and Odell Beckham Jr. The game will be broadcast nationally on NBC.

The Bulldogs had some gaps to fill on an offensive line that led a rushing attack that was Top 10 in the country on yards-per-carry.

Moorhead is happy to have Cross at MSU to help keep the Bulldogs plowing along. Cross is the highest-ranked of three prep offensive linemen Moorhead signed Wednesday.

“Any time a player of his caliber from in-state on the offensive line, a four-star guy who could have gone just about anywhere in the country (signs with MSU), I think that’s a huge feather in our cap,” he said.

Cross said he enjoyed the recruiting process, “but now it’s time to get down to business.”

He plans to major in sports management, with hopes of being a player representative or athletics director. That’s the plan for after the NFL, if things go the way he hopes.

He is the son of Mitchell Cross Sr. and Owedia Cross, and his brother Mitchell Cross Jr. was a lineman on the Tornadoes’ 2014 state championship team.

“We’re going to miss him on the field and off,” Breland said. “The way he leads. He knows he’s good, but he never acted like he’s better than anyone else. He always did extra. He was always doing what he was supposed to do. He’s just a character guy, grateful and thankful.”