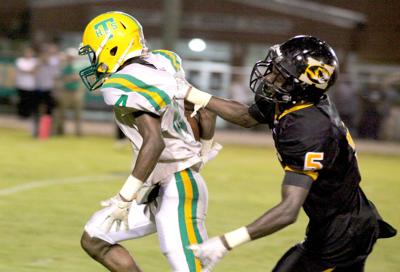 Walker Thompson kicked a pair of field goals and two last-gasp passes fell incomplete as West Jones lost to rival Wayne County 10-6 on Friday night in the season-opener for both teams.

Wayne County had the ball deep in its own territory with 2 minutes to play and the Mustangs out of timeouts. The War Eagles ran four running plays — including on fourth down — and turned the ball over with eight seconds to play.

WJ quarterback Allen Falls, who came off the bench in the second half to spark a WJ rally, threw twice into the end zone, but each time, WJ receivers couldn’t keep their hands on the ball.

Thompson’s second field goal, a 36-yarder, gave WJ a 6-3 lead. But WC quarterback Zhakerreun Wesley scored on a 4-yard run in the fourth quarter for the 10-6 lead.

The Mustangs will host Northeast Jones on Friday night in the first Battle for the Belt game of the season.

Zias Perryman had two touchdown runs and fell on a fumble in the end zone to lead Laurel to a 55-13 thumping of Callaway Between the Bricks on Friday night.

The Golden Tornadoes are scheduled to play at Hattiesburg next Saturday in the annual Lil’ Brown Jug game.

Fifi Magee ran for two touchdowns and threw for two, but it wasn’t quite enough to top Taylorsville and Ty Keyes on Friday night in The Jungle. The sophomore sensation threw for a pair of scores and ran for another as the Tartars won, 28-25, in the season-opener for both teams.

The Tigers had trouble in the kicking game, missing their first three PATs and a 31-yard field-goal attempt in the three-point loss. They also fumbled away one kickoff and couldn’t come up with a loose ball after causing another on a kickoff.

In the battle of talented QBs, Keyes connected with Jalon Clark from 35 yards to cap the Tartars’ opening drive. Magee countered with a 13-yard run for a score to finish off the Tigers’ first drive. Keyes’ keeper in the final minute of the first quarter gave the Tartars a 14-6 lead.

Magee hit Jay Jones (48 yards) and Mason Smith (65 yards) with big TDs in the second quarter to take an 18-14 lead into the half. But Taylorsvile came back and got a 21-yard run up the middle to paydirt from CJ Williams for a 21-18 lead. Keyes tossed a 22-yard score to Raven Arrington late in the fourth and Chandler Cline’s fourth PAT put the visitors up 28-18 with 3:12 remaining.

Magee guided his team to one more score, calling his own number from 5 yards out with 43 seconds left. Taylorsville recovered the onside kick to secure a victory for coach Mitch Evans in his head-coaching debut.

The Bobcats raced out to a 29-0 lead in dispatching the Class 5A Braves in the opener on The Reservation.