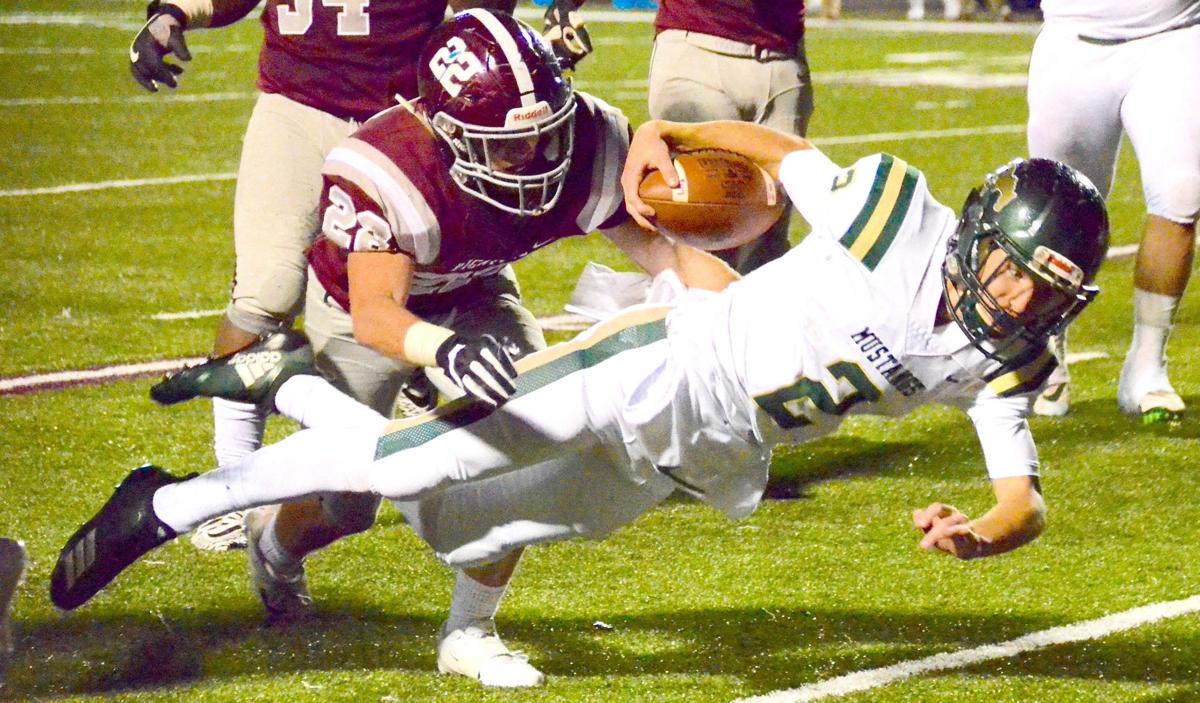 West Jones quarterback AlanFollis (2) dives for a first down as Picayune’s Dylan Schabault tries to make the tackle. 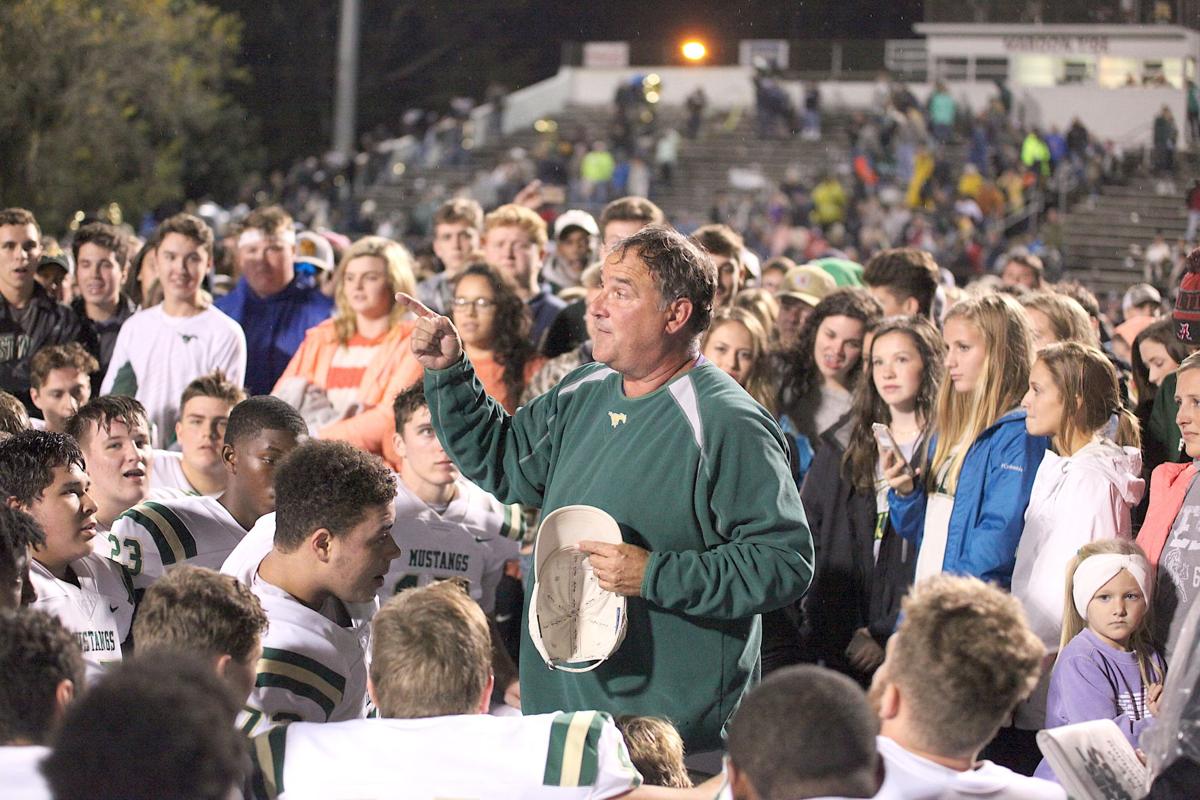 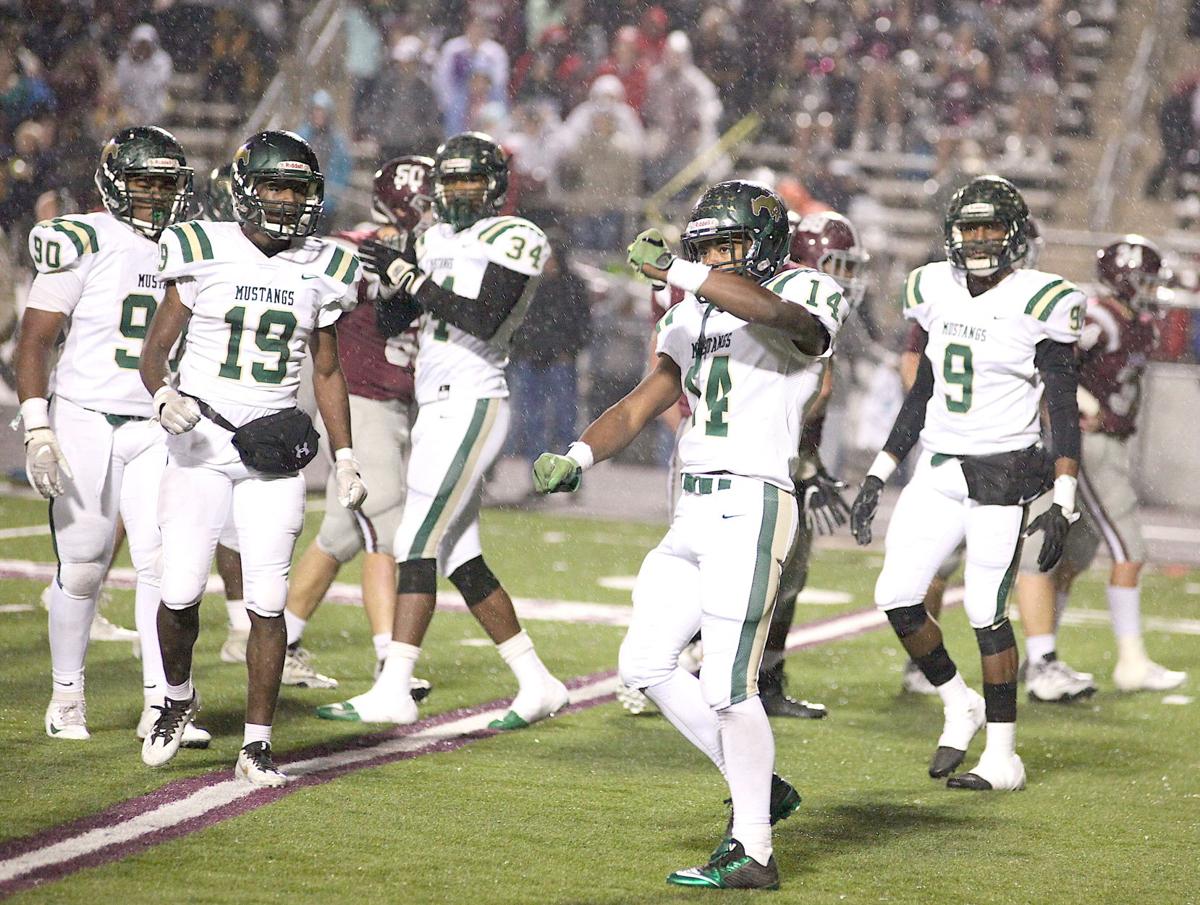 Freshman Kendorean Russell looks to the sidelines after the defense rained down on the Tide. (Photo by Mark Thornton) 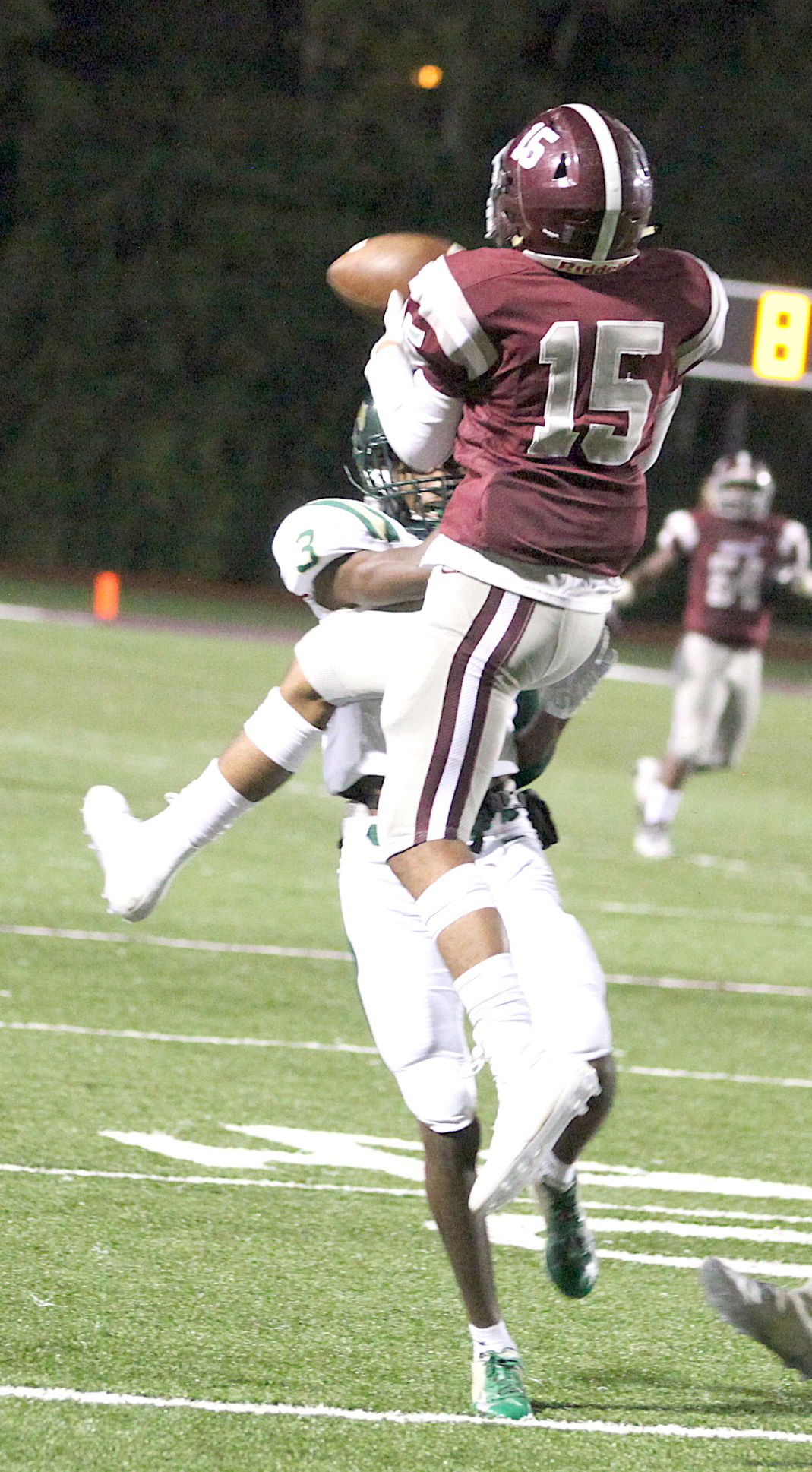 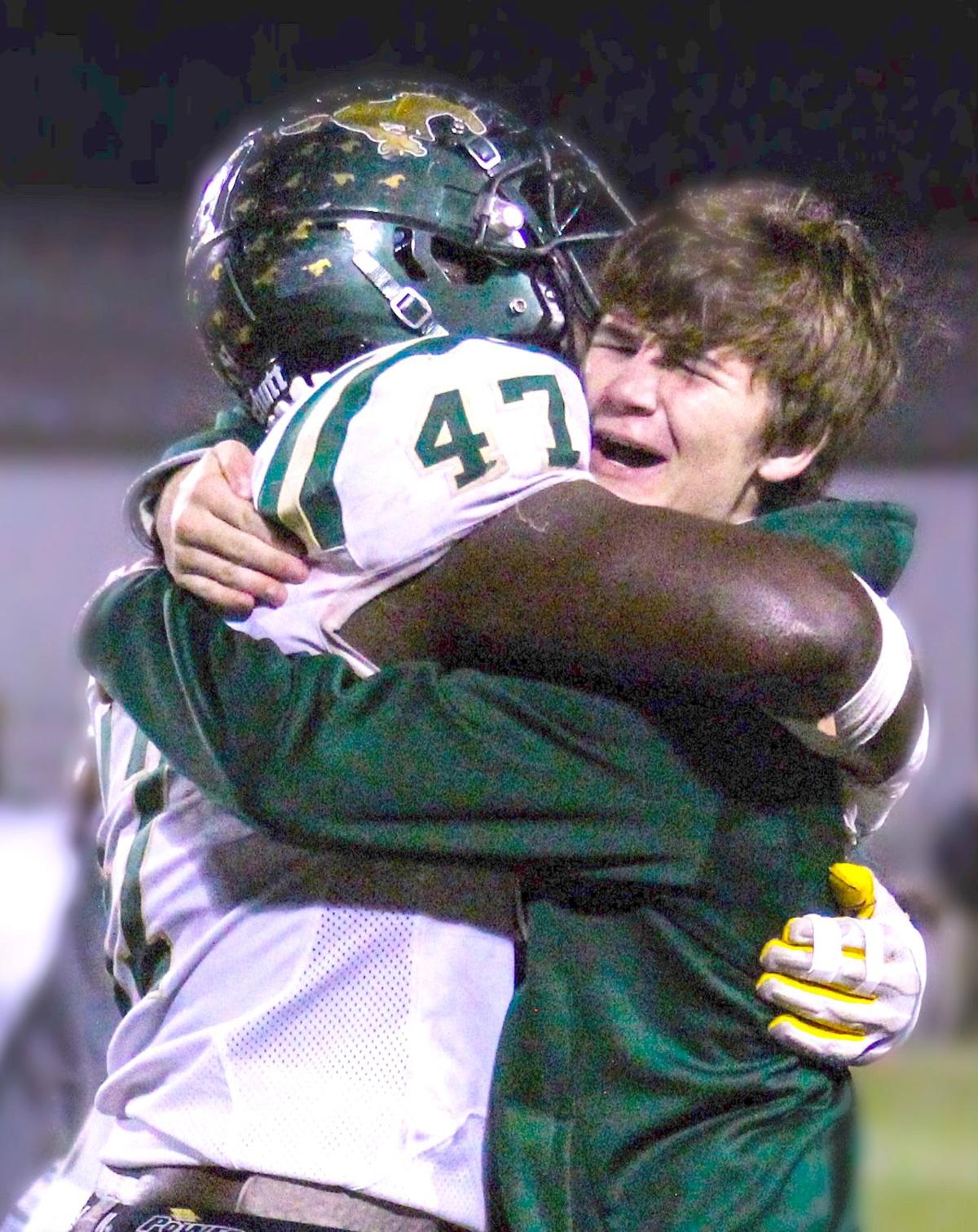 West Jones quarterback AlanFollis (2) dives for a first down as Picayune’s Dylan Schabault tries to make the tackle.

Freshman Kendorean Russell looks to the sidelines after the defense rained down on the Tide. (Photo by Mark Thornton)

Now the Mustangs are on the rise to a level the program has never been before, and those two memorable plays — one that started the scoring, one that ended the last scoring threat — are forever etched in their minds.

So is the final score. West Jones 21, Picayune 13 in the Class 5A South State championship game. “I was just trying to make a play,” said Young, an Alabama commit who ran down Picayune QB Jakail Myers on the final play of the game for a 9-yard loss and the biggest win in West Jones history. “I was trying to do something for my seniors ... do something special.”

And special it was. Coach Scott Pierson was taking in the scene as his players, alum and fans celebrated their first South State title to advance to the first state championship game in program history.

The Mustangs (12-2) will go to Southern Miss on Saturday to face West Point (13-1), which has won back-to-back state championships, nine in all.

But Pierson wasn’t thinking about the Green Wave. Not yet.

“This is special,” he said, his voice cracking with an uncharacteristic display of emotion. “You look up and see all of your players that have played for you before that were unable to get you to that point, and they’re happy for you ... and you realize you’re doing things right.”

Coming off their bracket-busting win at top-ranked Hattiesburg the previous week, sophomores Follis (10 carries for 64 yards and 1 TD, 17-for-27 for 197 yards) and Kentrell Pruitt (13 carries, 44 yards, 2 TDs) scored all three ’Stangs’ TDs , and that was all their senior-laden stop squad needed.

Follis appeared to have been sacked in the backfield on WJ’s opening drive, but he rolled over the Picayune defender and never touched the ground. There was no whistle, so while the Tide players were celebrating, Follis took off toward the end zone and scored on a 30-yard run to give his team something that was really worth celebrating. The extra point by Ole Miss commit Walker Thompson made it 7-0 ’Stangs midway through the first quarter.

The Tide drove inside the WJ 5-yard line on the game’s opening drive, which was helped along by a big kickoff return. But a WJ goal-line stand forced Isaac Brice to attempt a 20-yard field goal, and it was no good.

Pruitt punched it in from 2 yards on the first play of the second quarter to finish off the ’Stangs’ second drive and Thompson made it 14-0. That possession was set up when Picayune turned it over on downs on another Stangs’ stop and Follis connected with Antonie Kirk, Tajrick Randolph and Jared Knotts on pass plays.

But the Tide didn’t turn over. They got an interception at the 1-yard line and a long return after WJ had driven deep into their terri- tory. That set up a 3-yard TD by the state’s leading rusher, Jortin Raine, and Brice made it 14-7 with 3:51 left in the half.

Once again, West drove deep into Tide territory, and a Picayune pick in the end zone was returned to midfield with under a minute to go. This time, the WJ defense responded. They caused a fumble on the next play and Jon Micah Cole- man recovered the ball with 34 seconds left in the half.

“I was extremely frustrat- ed, because we’re better than that,” Pierson said of the Picayune picks on his team’s last two possessions of the first half. “But that’s the beauty of this team. I think

The teams traded punts to start the second half, but Raine broke loose for a 40-yard gain with about 4 minutes to go in the third quarter. That set up a rare scoring pass on an even rarer razzle-dazzle play for Picayune.

Raine tossed a 28-yard TD halfback pass to Kaleb Hart to pull the home team within a point with 3:37 to go in the third quarter. But Isaac Brice’s PAT attempt struck the right upright and West Jones held on to a 14-13 lead going into the fourth quarter.

“It was a game full of momentum changes,” said Picayune coach Dodd Lee, who has guided the Tide to three state titles. “We got some terrible breaks in the first half, but that’s part of the game.”

The Mustangs grabbed the momentum back in their next possession.

They put together a seven-play, 66-yard drive that was capped by Pruitt’s 3-yard score and Thomp- son’s kick with 1:15 remaining, making it an eight-point game, 21-13. Randolph fought through defenders on the first tier and second tier of coverage for a 32-yard catch-and-run to put his team at the Picayune 28- yard line and highlight the game-sealing drive.

The Stingy Stangs’ D pitched a shutout in the fourth quarter.

The teams continued to trade punts — and a few punches and personal fouls — and Picayune failed to cash in on another interception.

Thompson stuck the Tide at their own 10 for their first possession of the fourth quarter, then he placed it at the 11 on their last one. That’s where they started a potential game-tying drive with about three minutes remaining. Picayune made it to midfield on another Raine halfback pass, this one a 33-yard dying duck to Dylan Schabault in the mist that saturated the stadium all night.

Coleman made a tackle for a loss on a pass play to Raine, then Myers was stopped at the line of scrimmage to make it third- and-12.

A false start pushed the Tide back on a play in which Young had broken through the line, grabbed the ball and bolted for the end zone. But on third-and-17, Myers darted and weaved his way past West jerseys for a 16-yard gain to make it fourth-and- one. Raine got the first down to put Picayune at the WJ 45 with less than 30 seconds to go and the clock ticking.

That’s when a green swarm of humanity descended on Myers to force an incompletion. And on what was the final play, Young broke through the Picayune line and chased Myers like he’d stolen something from him, diving to grab an ankle to pull him down and set off a celebration Mustang Nation has been waiting to set off for decades.

Damion “Big Country” Cunningham had a whopping 21 tackles and fellow seniors Sley Lyon and Young chipped in 11 and 10, respectively. Freshmen defenders Kendorean Russell and Dedrick Hicks had totals of 13 and 12. Detorurean Crosby broke through and had two tackles for loss, one a sack. Young had the other sack.

Kirk, the talented two-way player, had six catches for 77 yards and Randolph had four catches for 76 yards. Jasper Jones, who made a pair of spectacular grabs in the win over Hattiesburg, didn’t have a ball thrown his way on this night, Pierson pointed out. Pruitt matched his season total with his two TDs in the semifinal win.

“We’ve got a lot of kids, that when their number’s called, they make the plays,” Pierson said. “Everybody’s accepting their role as a piece of the puzzle, plus we’ve got really good players that make plays.”

It was the 200th win for Pierson, but it would have been a memorable one for him even without the milestone number. It was his sixth time to take the Mus- tangs to the South State title game in his 17 years over the program. The team also made it to the equivalent round in the early 1980s, when the playoff format was different.

The Mustangs’ first trip to a state championship will be the first time that The Rock has served as host of the title games.