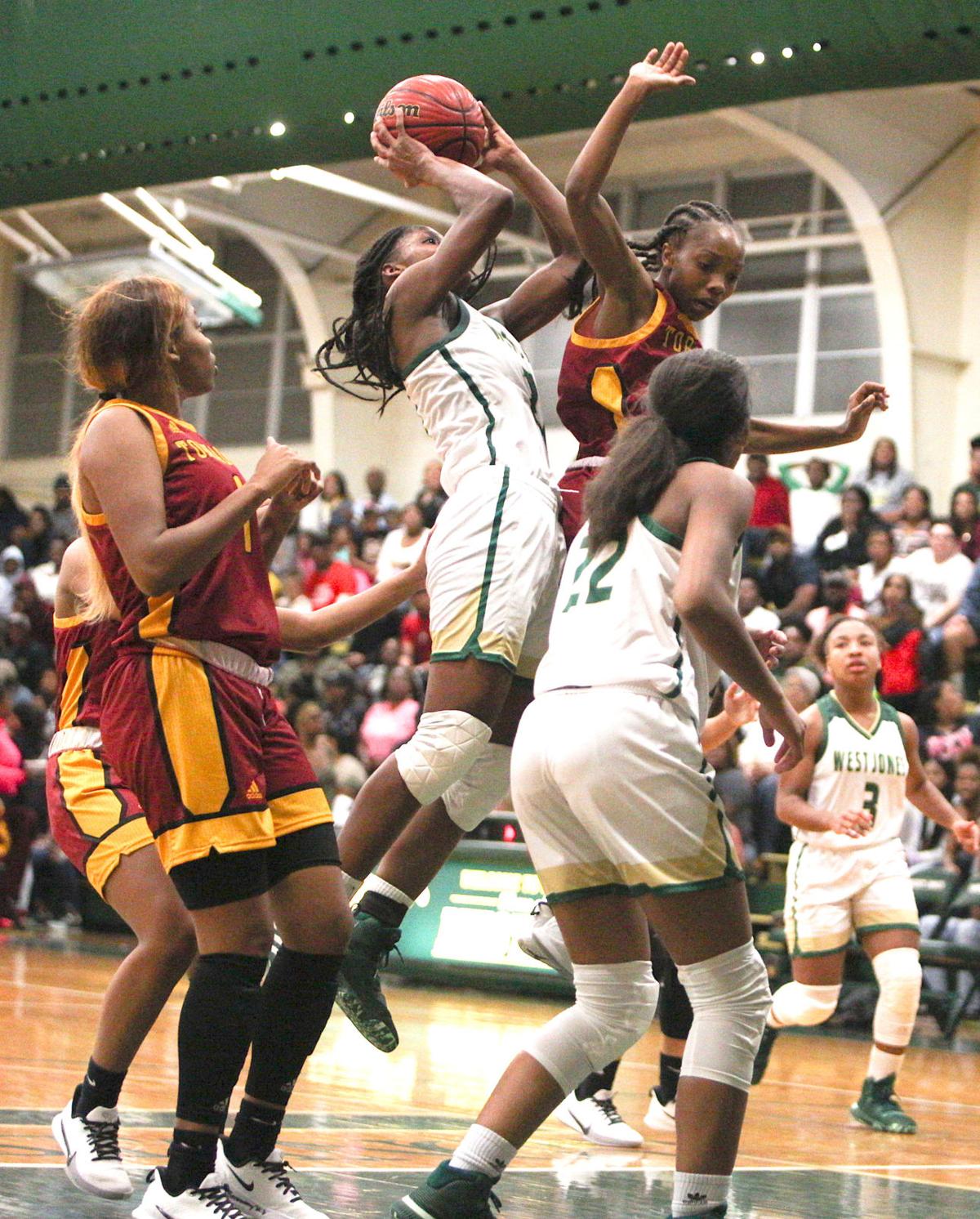 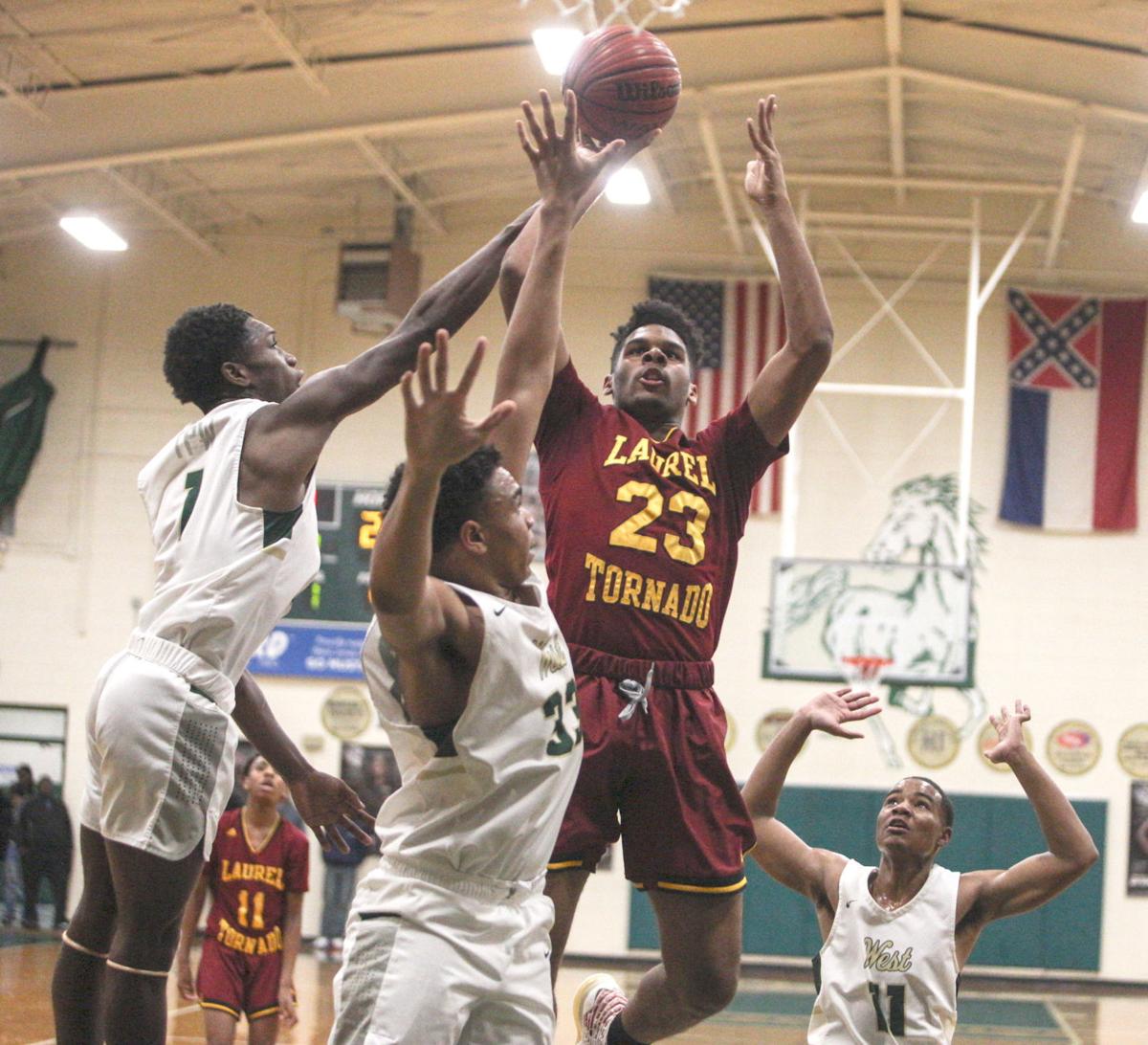 West Jones hosted Laurel on Friday in another big Region 3-5A doubleheader, the first of two meetings between these schools this season. In the girls’ game, the Lady Mustangs snuffed out a late comeback attempt and pulled away for a 67-48 victory. In the boys’ game, the Tornadoes bounced back from a slow start and dominated down the stretch, winning 60-42.

The Lady Mustangs (11-5, 2-1) were coming off their first region loss of the year, falling 80-65 on the road against Brookhaven. Head coach Sharon Murray said she was hoping to see more effort and resilience from her team in Friday’s game against Laurel (9-9, 1-1), and the team did not disappoint.

"The big thing is I want our team to improve," said Murray. "To improve, you have to keep fighting. I wanted to see our girls fight for the game, play good defense and be scrappy. I wanted to see effort and heart."

West Jones built an early lead in the first quarter, largely due to the performance of sophomore guard Trinity Taylor, who made five shots from behind the arc in the period. Taylor scored another six points in the second half, finishing the contest with 21 points.

The Lady Tornadoes slowly chipped away at the lead over the course of the second and third quarters. Senior point guard Beverly Tillman led the charge with a team-high 24 points, helping dwindle the lead down to just seven points early in the fourth. At that point, however, West Jones’ senior leader Brikayla Gray took the reins on offense and iced the game.

“(Brikayla) makes everyone around her better,” said Murray. “She’s good at distributing the ball and getting everyone involved. But at the same time, she knew we needed some baskets.”

Gray scored 14 of her 34 points in the final period, allowing the Lady Mustangs to pull away for a 19-point win.

Unlike the Lady Mustangs, Laurel’s boys (11-6, 2-1) fell behind during a lethargic first quarter of action that resulted in an early seven-point lead for West Jones (8-7, 1-2). Starting out sluggish has been an unfortunate trend for the team so far this season, head coach Marcus Price said.

“We've been notorious for slow starts this year," said Price. "Part of that is because we're trying to find our groups and rotations and go with the best guys on any given night."

Slowly but surely, the Tornadoes found their rhythm and took control of the game. A buzzer-beater by sophomore Kiron Benjamin tied the game at 14 at the end of the first, and a 12-3 run in the second helped them build an eight-point advantage by halftime.

That lead continued to grow in the second half due to more of the same dominance on offense. Thirteen players scored points for Laurel in the game, led by seniors Khylin Dixon (11) and Antwan Hatten (10).

“It was a good win for us,” Price said. “We got contributions from all of our guys. We like to play a lot of guys. Our third group gave us a big push tonight and gave us a little bit of separation.”

Next on the schedule for West Jones’ teams is a doubleheader on Friday night against Brookhaven, their second meeting of the regular season.

Likewise, Laurel’s teams will travel to Brookhaven tonight (Tuesday) and, on Friday, they will travel to Ellisville for matchups against South Jones.