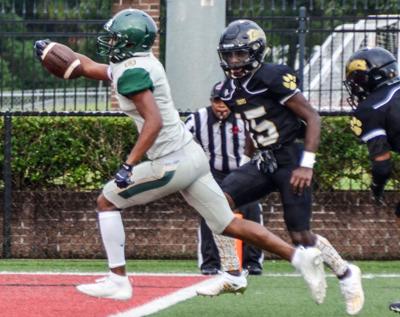 There aren’t very many reasons to be surprised these days when you hear about dominant performances by the West Jones Mustangs. After all, head coach Scott Pierson’s teams have posted a 33-8 record over the last three seasons in Soso, with a Region 3-5A title and a 5A South State championship to their resumé during that span.

For the most part, such was the case Friday night when the Mustangs shellacked the 4A Mendenhall Tigers, 32-7, in a two-quarter jamboree to tune up before entering Week 1 of the regular season. We already knew of the returning talent and experience on the roster, and we knew they’d likely come out with guns blazing in 2020.

There was, however, one aspect of the Mustangs’ performance that I must admit I did not see coming. While browsing through the statistics over the weekend, I noticed that the performance of one particular player —  a young man who was not even on the roster last fall  —  just seemed to leap off the screen as something that should be worth checking into.

This player was Matthew Nixon, who recently transferred to West Jones from Mize Attendance Center. Friday night, Nixon made a huge impact on both sides of the ball, recording an interception from the cornerback position and taking a screen pass from Alan Follis 53 yards to the house as a wide receiver.

As I came to find out, I’m not the only one who has been taken aback by Nixon’s abilities during his short time with the team. The more I asked around, the more impressive the Mustangs’ new addition seemed to become.

Don’t take my word for it, take those of the Mustangs’ veteran leaders.

“Matthew has all the tools to be as good as he wants,” said Follis, who is entering his third season as a starter. “He’s about 6-foot-4 and (he) can run. He transferred in from Mize, so getting him comfortable in our offense has been the biggest thing with him. He’s already made an impact in the scrimmage on both sides of the ball, so there’s no telling what all he can do for us this year.”

Moments later, Follis returned to add, “And he’s only a sophomore.”

“I think he is a phenomenal wide receiver and an even better cornerback,” raved senior running back Kentrel Pruitt. ”He listens and he gives 100 percent on every rep he takes. I think he’s a lockdown corner and a game-changing receiver, and I think we can win a lot of games with him.”

Nixon’s consistent and relentless effort on the practice field seems to have been noticed by several of his new teammates.

Junior defensive lineman Dedric “Debo” Hicks shared many of the same sentiments about the newest member of the Mustangs’ defense.

“He gives us 100 percent in practice every day,” Hicks said. ”He does his job, plays smart and plays fast. He leads by example and doesn’t do all the extra talking.”

To those who may say, “That’s just practice” or “Jamborees don’t really count,” just take a glance at what Nixon accomplished during his brief stint with the Mize Bulldogs.

As a freshman in Smith County, Nixon led the Bulldogs’ defense with six interceptions in 11 games during the 2019 season. He ranked second among the Bulldogs’ offensive players in all-purpose yards, totaling 855 yards and eight touchdowns through his contributions as a passer, rusher, receiver and special teams return man.

I already anticipated West Jones to be back in contention as a major player at the table in the 5A playoffs in November, simply based on what we already knew about the team. But the addition of a 6-foot-4, hard-working, playmaking receiver and cornerback to any football roster is enough to turn heads.

Keep an eye out for Matthew Nixon on Friday nights this fall. There’s a chance he could make a significant early impact on an already outstanding football team.