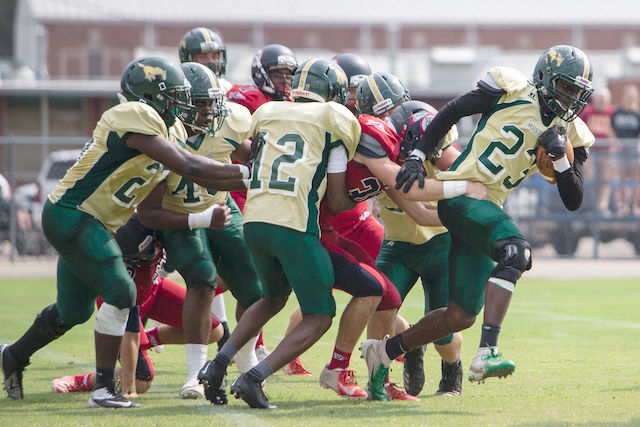 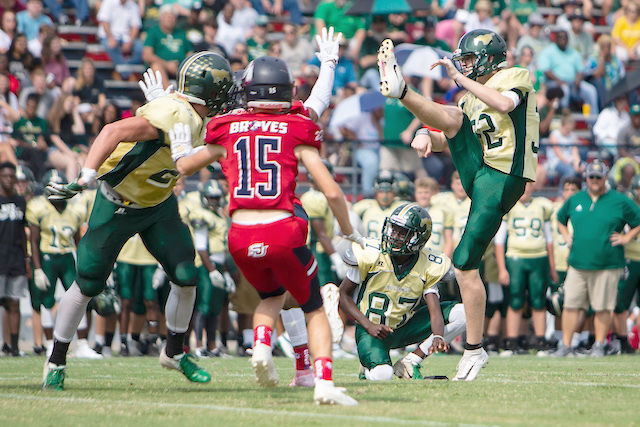 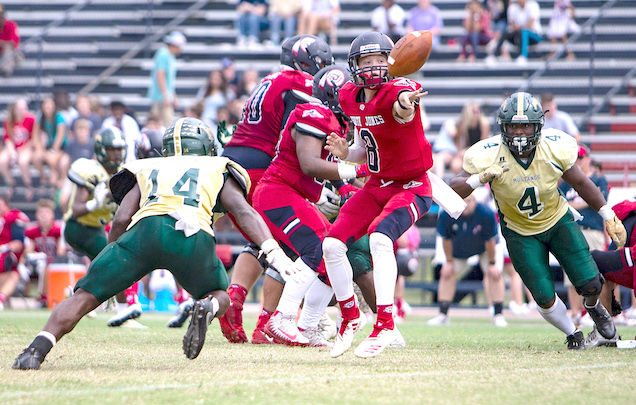 South Jones freshman quarterback Luke Griffin tosses the ball to a teammate during an option play as West Jones' Ken Russell (14) and Londarrius McRunnels close in.

South Jones freshman quarterback Luke Griffin tosses the ball to a teammate during an option play as West Jones' Ken Russell (14) and Londarrius McRunnels close in.

The West Jones Mustangs (6-0, 2-0) maintained their spotless record with a 37-5 road victory over the South Jones Braves (1-6, 0-2) in a game played Saturday morning because of severe weather Friday night.

Day or night, though, it was a handful of key plays that allowed West Jones to run away with a crucial Region 3-5A victory. It also propelled the Mustangs to 2-0 in the Laurel Leader-Call Battle for the Belt. The winner of the Oct. 18 game between Laurel and West Jones — the only two teams to have won the belt in seven years of its existence — will again decide the Jones County champion. Northeast Jones will finish third in the standings and South Jones has gone winless in belt games this season.

After 13 scoreless minutes, West Jones finally put together a big offensive drive. A long pass from Alan Follis to Jalen Keys set up the Mustangs inside the Braves’ red zone and Kentrel Pruitt then finished the drive with a 2-yard touchdown run. Seven minutes into the second quarter, Jasper Jones scored on a 9-yard carry right up the middle to extend the lead.

Two drives later, Follis connected with Tajrick Randolph on a slant route, which he took 59 yards for a third touchdown. With three minutes remaining in the half, defensive end Tavis Wilson recovered a blocked punt inside the red zone to set up a 6-yard touchdown run by Joshua McDonald, giving West Jones a 30-0 lead going into the locker room for the break.

The Braves’ first points came from a mishandled snap that sailed over the Mustangs punter’s head and out of the end zone, resulting in a safety. The Mustangs scored for the last time in the waning moments of the third quarter on a 12-yard touchdown run by McDonald. With just over a minute left in the game, Mark Diers hit a 40-yard field goal attempt to bring the game to its final score of 37-5.

The Mustangs’ defense made a huge impact on the game, holding the Braves’ offense to just 139 total yards and forcing four turnovers. Follis completed 5 of 10 pass attempts for 145 yards and one touchdown—the 59-yard connection to Randolph which was his only catch of the day. McDonald led the rushing attack with 58 yards and two TDs on eight carries.