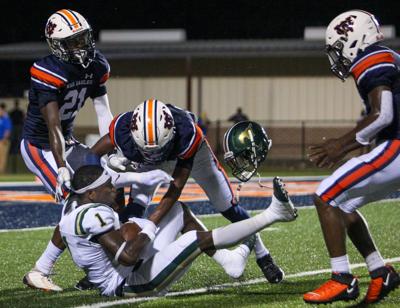 For the first time in program history, the West Jones Mustangs hold a three-game win streak over their rivals from Wayne County after defeating them 18-2 in a hard-fought road game.

Locked in a defensive struggle, the Mustangs capitalized on two scoring opportunities late in the second quarter to take a 10-0 lead into halftime. The first points were scored on a one-yard carry around the edge by senior running back Kentrel Pruitt, and moments later freshman Joseph Hernandez tacked on three more points with his first career field goal from 24 yards out.

The Mustangs' and War Eagles' defenses swapped safeties in the third, resulting in a 12-2 advantage for West Jones entering the final quarter. Following a goal line stand to keep Wayne County's offense off the board, senior quarterback Alan Follis put the win on ice with an 80-yard touchdown pass to Cedric Bender.

"That was the icing on the cake," said Mustangs head coach Scott Pierson after the game. "The difference in the game, realistically -- they had the mojo going and were inside the five, and they didn't get in. Even though we gave up the safety on the next snap, that kind of stemmed the tide. And then the big the big throw to No. 21 ended it."

The Mustangs, 2-0 out of the gate, have not lost a regular season game in nearly two full calendar years. They'll put that streak to the test again next week with a road game against the Petal Panthers, who defeated Laurel tonight 38-12.

For a more in-depth recap of Friday night's game, keep an eye out for Tuesday's edition of the Leader-Call sports section.