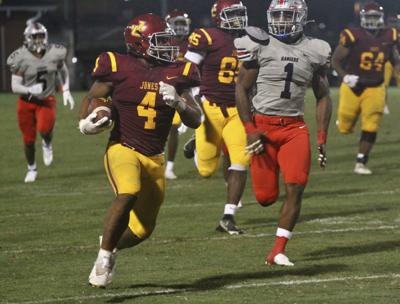 No. 10-ranked Jones College has

impressed in its first two games of

the season. But that means little

heading into this week’s MACCC

said the game will be a challenge

“It is our first time taking a

bunch of young kids on the road

and that’s always an experience,”

he said. “We had better be ready

Coach (Ken) Karcher for a long

time. They know what they are

doing and they have an excellent

The Bobcats visit Decatur for a

day). The game will air on JCJC.

and Luke Johnson on the call.

in its first two games. The Rangers

were second in the nation until

they lost to Jones.

final quarter, but a 35-yard field

goal by the Trojans with 1:49 left

proved to be the difference.

“If you look at both films,

games,” Buckley said. “They have

lost to two teams that are (com-

bined) 4-0 in East Mississippi and

Buckley could not find much

fault with the Bobcats in their play

“We played extremely hard and

we played extremely physical,” he

said. “Most importantly, I thought

we executed in all three phases of

the game. The kids were locked in,

focused and ready to play. At the

same time, there is a lot of im-

provement that can be made.

“We left some plays on the field

on both sides of the ball. We’ve

got to clean up a lot of little things

to be really good. But we had a lot

of things going our way the other

and two touchdowns. In the week

one win over Northeast, he was

“I think DaeDae is a heckuva

ing game, everybody thinks it’s the

quarterback and it’s not always the

quarterback. We threw and caught

the ball well. I think we had one

we had six the week before.

What DaeDae does not surprise

me as his coach. He was locked in

and had a really big night.”

seven catches for 82 yards and a

Sanders had five catches for 94

yards and a score. Running back

La’Damian Webb had another big

and two touchdowns, including a

the play of the offensive line made

it possible for the Bobcats to pile

(Northwest) were going to try and

stop La’Damian and we knew we

had to throw the ball to win the

ballgame. We threw the ball and

caught the ball well and it starts

with the protection. The offensive

line did a great job giving us time.”

On the other side of the ball, the

west offense to only 11 first downs

sive back Lardarius Webb Jr. had

Mike Cockream led the team in

tackles for the second straight

game with seven stops and two

“The defensive line did well,”

Buckley said. “I think we held

them to 86 yards rushing. It was

just a tremendous effort on that

side of the ball. Little Webb played

well. Our back end is very talented.

They are smart kids, they align

correctly and they cover well. They

understand man and they under-

“It was a great team effort on

defense. Coach Pollard and the

defensive staff did a great job

preparing for Northwest, who can

But Buckley knows the Bobcats

mance as they get ready for East

Central, especially with this being

the division opener for both teams.

“There is a lot of parity in this

league right now and if we are

not ready to play it will be a long

night for the Bobcats,” he said.

“East Central is well-coached and

they play hard. They do a great job

scheme-wise. We had better be