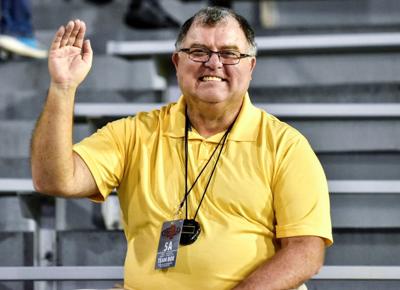 As the old saying goes, a lamp that is lit for others will brighten your path as well. Few understood this better than Dennis Bohannon, who dedicated much of his life to lighting paths for student-athletes in Jones County.

“Coach Bo,” as he was affectionately called, never viewed his gift of service as a burden or obligation. A former football player at Jones College and Southern Miss, Bohannon viewed it as a way to use his own passion for sports to uplift his community. Just hours before he was called to his heavenly home on Nov. 7, Coach Bo was on the visitors’ sideline at Brookhaven High School doing what he loved— keeping stats for the West Jones Mustangs. In fact, most of the stats reported for the Mustangs throughout the Pine Belt came directly from Bohan- non, who went out of his way to share his collections each week with the Laurel Leader-Call and several other media outlets throughout the region.

“He kept us from getting so many penalties,” recalled West Jones’ Joshua McDonald, who until last week had never experienced a Mustangs football game without Bohannon on the sidelines, taking stats on his clipboard and helping the coaching staff ensure that the players stayed within the permitted boundaries. He happily did so for many years, which did not go unnoticed or unappreciated by head coach Scott Pierson.

“I knew him for a long, long time, and I can honestly say I never saw him have a bad day,” Pierson said. “He was out here every Friday night helping us with stats, and he was always happy to be there.”

Even on occasions when the Mustangs were struggling, Bohannon still had a way of being a positive light for others.

“This is an emotional game, and I wasn’t always in the best mood, but he’d always come in and find a way to make me smile,” Pierson said. “He meant
a lot to us, and we’re sure going to miss him.”

His ability to find unique means of service was never confined to just the community of Soso. A co-owner of the Karmel- Korn Shoppe / The Popcorn Place in the Sawmill Square Mall for 28 years, Bohannon would often donate caramel corn to the football team at Northeast Jones, where he graduated in 1974.

Even when the Friday night lights were shut off, Bohannon remained eager to serve those he cared about. Those from his home church, Oakland Grove Baptist, say he always went out of his way to lend a helping hand.

“I’ve known him my whole life,” said Dawn Finley of the Pleasant Grove Community. “We went to church together at my home church, Oakland Grove. He was also the sound man for several years and always put up with me either practicing a song a hundred times

or either running in at the last minute throwing him a tape or CD. Always smiling and encouraging. He was the same every time I saw him. He will be greatly missed.”

As would be expected, the same can be said for his time in classrooms as
a math teacher at West Jones, which perhaps gave birth to the infatuation with numbers that allowed Bohannon to be of great assistance on the football field.

“Coach Bo was my geometry teacher during my 10th grade year,” recalled West Jones graduate Cassidi Hankins, who now teaches kindergarten at East Jones Elementary School. “He was the kind of teacher who made every student feel like they were his favorite. We rolled our eyes at his pep talks at the pep rallies, but secretly, we knew they wouldn’t have been the same without him there.

“He had retired and was driving a school bus when I began teaching. He remembered me and was elated to find out I was a teacher. I would just describe Coach Bo as genuine. If there was a problem, he wanted to help, and he was the best at making others around him smile.”

Bohannon and his kind deeds will be remembered by many throughout the towns and communities that he loved. Whether he was at church, in the classroom or roaming the sidelines on Friday nights with the Mustangs, Dennis Bohannon lived a life that leaves us all with one final lesson: A life of service never returns void, and small acts of kindness can make an impact that will always be remembered.