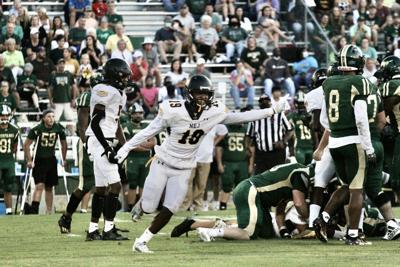 There was a time not long ago where the

idea of Northeast Jones and South Jones not

meeting on the gridiron was an inconceiv-

able thought. The two schools are less than

20 miles apart and have played each other

since before the introduction of classifi-

cations in Mississippi. But the COVID-19

pandemic forced schedule changes for both

teams that erased the matchup in 2020 for

the first time in the series’ storied history.

Resuming the series this year means there

will be a renewed sense of vigor surrounding

the rivalry. Both teams being significantly

improved will only help bolster the anticipa-

tion surrounding the Leader-Call Battle for

14 scorching of Forrest County AHS, while

“It’s one of the biggest games on our

schedule, not just because of what the game

means to the community, but because they

“They present a lot of challenges for us.

Their quarterback is a really good player,

and I am sure he is just getting better. They

have a lot of guys on offense that make plays

for them. They’re just getting better, and we

have to be ready to match it. We’re going to

need to play a complete game and need to

compete our tails off.”

big reason for that improvement. The field

general for the Braves, Griffin has gained a

reputation of making off-script plays with

his arm and legs. His ability to throw the ball

which is something the Braves will need this

Northeast Jones quietly has one of the

better front sevens in Class 4A to try to neu-

tralize Griffin. The unit is led by defensive

with a quick first step, Moncivais leads the

four for a loss, and a sack that resulted in a

safety. Braddock and Rowzee have combined

for 59 tackles and they will play a crucial

part in stopping the run.

“This is probably the best defense we’ve

get after us. They’re very active on defense

and swarm to the ball. We just need to fo-

cus on our job and keep getting better each

week. It is one of those games that just has

a little extra intensity to it, because the

kids really want to beat each other.”

The Braves’ and Tigers’ offenses are

runs the Wing-T, which is one of the

big reasons that the Tigers have already

doubled their win total from 2020 in just

three games. In both of Northeast Jones’

wins, the run-heavy style was a big fac-

tor in wearing down their opponents and

controlling the clock. The Wing-T is not

often used in the larger classifications, so

it is something that most defenses are not

So far this year, the Tigers have not

produced any eye-popping rushing per-

formances with their new offense, but it

would like to see his team continue to fine

“It all comes down to execution,” Brad-

so far, but we have to keep getting better

at the little things. Limiting turnovers and

unnecessary penalties is something we

have to do a better job of. I’ve said it a lot,

but I like this team. We’ve got some special

guys on and off the field, and I wouldn’t

trade them for anyone.”

The South Jones defense rising up to

meet the challenge is what Breland is

hoping to see. The Braves have played well

on defense through their first two games,

but there have been moments when they

had breakdowns. Forest Hill was able to

score on a long passing play where several

receivers were open. The Tigers’ offensive

style lends itself to the occasional deep,

play-action pass and it is something the

Braves’ secondary needs to be ready for.

ary, and will be responsible for not getting

lulled to sleep by the Tigers’ run-heavy

offense. On the defensive line, Sawyer

Griffith will be crucial in blowing up both

running and passing plays. He recorded 16

tackles for loss in 2020, so the backfield is

a familiar place for the senior.

“Jaquan and Matt are guys we rely on

in the secondary,” Breland said. “Both of

them are leaders for us.

“Sawyer is a guy that had a great off-

season and put in a lot of work. He’s a guy

that has played a lot of football for us and

it shows. I’ve liked our effort on defense,

and we need to see more of that this

This game will also have implications

in the Leader-Call’s “Battle for the Belt”

pack with a win over Northeast Jones. The

Tigers have been eliminated from belt con-

tention after the loss, due to needing wins

over West Jones and South Jones to claim

Kickoff is slated for 7 p.m. For live up-