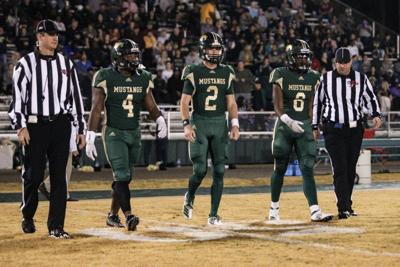 The West Jones Mustangs (2-0) have not lost a regular-season football game since Oct. 12, 2018, having won 16 straight since that night at Laurel High School. They have not lost a regular-season home game since Aug. 17 of that same year. This Friday, their 16-game streak will be put to what may be its toughest test to date as they host the highly touted 6A Petal Panthers at The ‘Shoe.

The Mustangs won their first two contests by a combined 41 points, but head coach Scott Pierson maintains that his team is still working out kinks that could prove to be problematic against top-notch opponents. Among the team’s main focal points entering Week 3, Pierson said, are improvement in the rushing game and finishing long drives into the red zone with points to put on the scoreboard.

"Defensively, we get better every week," Pierson said after last week’s win at Wayne County. "But that's always the case for us. Offensively, we're sputtering badly. We have a lot of skilled players, but we're not executing. We have to run the ball. Let's be honest: You can't throw the ball every down, (but) until we learn how to run the ball, we're going to struggle a little bit."

Added Pierson, “The biggest thing is that when we get in the red zone, we have to get points. We had a lot of opportunities to make it easier on ourselves in the second half, but we didn’t. The longer you let good teams hang around, it’ll come back to bite you.”

Petal head coach Marcus Boyles — who is no stranger to showdowns at ‘The ‘Shoe’ from his years at Wayne County — and the Panthers (2-0) will come to Soso Friday expecting their toughest test of the young season. The Panthers won their first two contests by a combined 47 points and delivered solid performances on both sides of the ball for the majority of each game.

Last week, Petal won its first home game against the Laurel Tornadoes, 38-12. Senior two-way standout Jonathan Harris has played a key role on both sides of the ball for the Panthers. As a receiver, Harris has racked up 255 receiving yards on seven catches with two touchdowns while tallying two interceptions, a forced fumble and a fumble recovery as a defensive back. Harris’ success has helped new starting quarterback Jackson Allen  adapt quickly to his new offensive system, completing 63 percent of his pass attempts for 480 yards and six touchdowns over the course of his first two games as a Panther.

West Jones has won 15 and lost 13 against Petal since the two teams first met in 1966. The Panthers have won the last three meetings, the most recent of which being a 31-0 shutout victory at Petal. Kickoff Friday will be at 7 p.m., with attendance restrictions still put in place by Gov. Tate Reeves and local health officials.