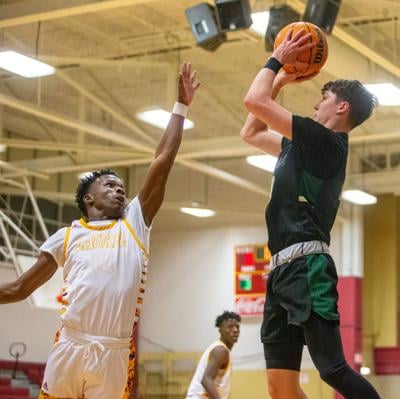 Tyler Oehrli knew the ball was coming his way when he took the court for West Jones' final possession, down by two with just 1 second left on the clock. He waited for the inbound pass with three simple thoughts repeating over and over in his head.

Catch it.  Line it up. Take the shot.

After the whistle was blown, Marlon Lindsay dished the inbound pass to an open Oehrli just behind half court.

He caught it. He lined it up. He took the shot.

The rest will go down in West Jones basketball history.

Oehrli’s 50-foot prayer at the final buzzer — a shot deemed worthy of ESPN SportsCenter’s Top 10 Plays — hit the dead center of the backboard square before dropping straight through the net, lifting the Mustangs to a 55-54 victory over Laurel to earn their first Region 5-5A championship.

“Every kid dreams of making a shot like that,” Oehrli said after the game, still short of breath from celebrating with his teammates. “I just did what I could with it. If I missed, no one could be mad at me. I wanted to knock it down or put it close,”

What SportsCenter didn’t show was Ajaveon Hatten’s jump shot to give Laurel a 54-52 lead just moments earlier. The buzzer sounded, and the Tornadoes began celebrating what they believed to be their own memorable, last-second region title victory.

That was until the head referee signaled for 1 second to be added back on the game clock. West Jones head coach Todd Arnold had signaled for a timeout just before time expired. There was still hope for the Mustangs — albeit slim,  but hope nonetheless.

Oehrli remembers entering the huddle for one last time with his teammates, many of whom seemed less than optimistic about their chances of pulling off a split-second miracle.

“I remember going into the huddle and seeing everyone shaking their heads, almost in disbelief,” Oehrli said. “I remember Coach Arnold trying to get us all refocused and get our eyes on the play that he was drawing up.”

Arnold’s play call was simple — get the ball to Oehrli near half court, let him heave it up and live with the outcome.

As improbable as it may have seemed, Arnold had good reason to believe Oehrli could make the shot. The reason? He had seen him sink it before — on more than one occasion.

“He’s a gym rat,” Arnold said of Oehrli. ”He’s shot that no telling how many times in practice.

“All we were trying to do was drag him across the court. I assumed (Laurel) would be in zone pressure, which is what they were in, and he was able to get in front of their guys and take the shot”

Just as Oehrli’s shot sailed far across the gym to find the basket, West Jones’ newest sports hero traveled a great distance with his family when they moved to Jones County from their previous home in North Carolina. With great admiration for Arnold and his fellow Mustangs, who made him feel right at home, Oehrli said their trust in him to take the final shot meant  the world to him, and he wanted to make them proud.

“It means a lot because you always want to have a good relationship with your coaches and be trusted by them,” Oehrli said.

Since Friday, the Leader-Call’s video footage of Oehrli’s heroic shot has been admired by hoops fans all across the globe on ESPN and has reached more than 70,000 viewers on social media.

Though he is grateful for the recognition, Oehrli wishes more of the highlight’s viewers would recognize the roles his teammates played in making the once-in-a-lifetime shot possible.

“Honestly, Preston (Turner), Dylan (Page) and Marlon were just as important as me in that play,” Oehrli said. “Without Marlon’s pass being in the right spot, I wouldn’t have gotten the shot off in time, and Preston and Dylan helped get me open because the defense had to be concerned about them taking the shot also.”

With a grin, Oehrli admitted that a fourth thought crept into his mind as he released his championship-winning buzzer-beater.

He caught it. He lined it up. He took the shot. And he knew it was going in from the moment it left his hands.

“As soon as I shot it, I had a pretty good feeling that it was in there,” Oehrli laughed. “It just felt like it was in the air for an hour.”