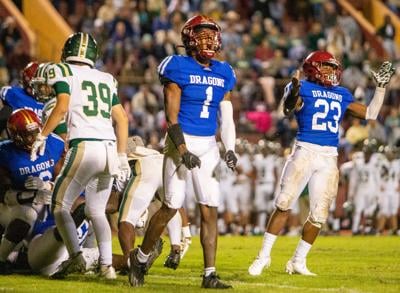 The first time Laurel and West Jones met this season, the two teams were battling for bragging rights and the Leader-Call’s Jones County Championship belt. When they meet again on Friday night, the Mustangs and Tornadoes will be fighting for a spot in the 5A South State title game.

“I think it speaks to the quality of football that’s played here in Jones County,” said Laurel head coach Ryan Earnest. “We’ve got some of the best players and best coaches anywhere in the state of Mississippi. I think that’s evident in the fact that you often see this matchup coming late in the playoffs. It’s a testament to West Jones and the program Coach (Scott) Pierson runs over there, as well as to ours, and we hope to continue building on that success.”

As the No. 1 seed in Region 3-5A, Laurel will host this week’s contest Between the Bricks. This privilege was earned thanks in part to the Tornadoes’ 19-13 victory over the Mustangs last month, which was West Jones’ first regular-season loss in nearly two full years.

A preseason favorite to contend for a title, West Jones knocked off the reigning South State champs in Round 1 with a 35-23 victory at Picayune. Senior quarterback Alan Follis tossed four touchdown passes, including a 52-yarder in the fourth quarter that put the game out of reach for the team that had ousted the Mustangs from postseason play in two of the past three seasons.

Earnest said he believes the chemistry built between Follis and his receiving corps is what ultimately makes the Mustangs an even more dangerous opponent than usual in 2020.

”This is a typical West Jones football team in many aspects,” Earnest said, “but I think the difference for them this year is that they’re really, really explosive in the passing game. They’ve got an exceptional group of receivers. They’ve got four or five guys who can take it to the house any time they touch the ball.”

The Tornadoes pose a number of problems for opponents as well. Since the return of senior running back Xavier Evans, Laurel has averaged 34 points per game en route to five straight victories, including last week’s 30-28 thriller against East Central to advance to the second round.

Even more, the Tornadoes have shown the ability to make crucial defensive stands in big moments, including an interception on the final drive of last month’s win over the Mustangs and three forced turnovers in the second half of last week’s win over the Hornets.

Follis, the field general of the Mustangs’ high-octane passing attack, said the key for his team this Friday will be efficiency, as an opponent like Laurel leaves very little room for mistakes.

“Last time we played them, their defense showed us a different look that we had not seen on film or in the previous times that we have played them,” Follis said. “But this time around, we feel like we’re prepared for whatever they decide to do defensively. So then, it just comes down to execution and not turning the ball over on Friday night.”

For Laurel, the keys to success this week are the same. Coach Earnest and his staff are preaching to their players that whichever team plays the most mistake-free football will have the upper hand in Friday’s rematch.

“There are really no secrets between these two teams,” Earnest said. “They have an understanding of what we’re going to do, and we’ve coached against them enough over the years to know what they’re going to do. I believe we created more turnovers than they did in the first game, which helped us come out on the winning end, so it’s really just going to come down to whichever team plays the hardest, minimizes mistakes and wins the turnover margin.”

The opening kickoff for what will be the final game for either the Mustangs or the Tornadoes is scheduled for 7 p.m. For those who cannot attend, the Leader-Call will have enhanced on-field coverage throughout the game and play-by-play of the game can be heard on SuperTalk 99.3 FM or online at supertalklaurel.com).

The winner of this game will play either Hattiesburg or Pascagoula for a trip to the state championship game in Jackson.