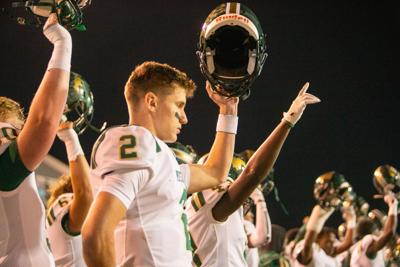 The formula for success in high school football includes many important factors. As the old saying goes, you won’t win many football games at any level without a strong defense. The Mustangs had that.

Any head coach with experience would also tell you that a talented and well-coordinated staff is an invaluable piece of the overall puzzle. The Mustangs had that, too.

Along with those things, as attested by West Jones’ head coach Scott Pierson, you need a talented and experienced “trigger man,” confidently calling the shots on offense and distributing the football to the team’s playmakers.

“When you have a trigger man, you always have a chance,” Pierson said.

With great pride, Pierson shared that West Jones had that, too. And that trigger man — senior quarterback Alan Follis — made all the difference in the Mustangs’ memorable 33-27 victory over West Point to win the 5A state championship.

Follis, who lined up behind center in 43 games as the starting quarterback for West Jones, said that — like most kids growing up in Soso — he had always dreamed of the opportunity to suit up in green and gold and make his own mark on the Mustangs’ football program.

“I remember playing in the back of the end zone on Friday nights as a kid and dreaming about playing across the fence on the real field,” Follis recalled.

In 2018, his number was called. Follis won the starting position as a sophomore and began learning week by week how to control the reins of the Mustangs’ offense.

Follis, who then weighed only 135 pounds, showed a lot of athleticism and potential early on in his time on the field. He passed for 1,864 yards and 15 touchdowns and ran for 376 yards and six scores on the ground as an elusive scrambler.

His game wasn’t very polished, and he still had a lot to learn about how to manage the talents and emotions of his teammates, but Follis knew he could rely on Pierson to guide him in the right direction.

“Playing for Coach Pierson has really been awesome,” Follis said. “He knows how to get the most out of his players in the best ways. Sometimes it’s by cracking jokes, and sometimes it’s by being tough on us, but he always finds a way to bring out our best.”

Such was certainly the case with Follis, who earned 37 wins — and about 35 more pounds — over the last three years with the Mustangs. His success didn’t go unnoticed by those who had come before him, who often reached out to show their support for Follis and his teammates as they battled to bring newfound success to West Jones’ program.

“I’ve had several former players and coaches talk to me throughout the playoffs in years past and especially this year,” Follis said. “But the most significant of those (conversations) was with Will Graves. He came and spoke to the team the day before the state championship, and he definitely had everyone in that locker room’s attention with what he said.”

With three years of experience under his belt, along with an enormous amount of motivation, Follis delivered one of his most memorable performances in his final game with the Mustangs. The senior was 14-for-18 passing for 215 yards, and he scrambled for 65 yards and a touchdown, leading West Jones to an awe-inspiring state championship victory.

His efforts were rewarded with the Player of the Game honors, as well as the opportunity to finally bring home a state crown for his team, his community and his deserving head coach.

“He’s been a very successful coach for a long time but has never been able to finish the season with a ring,” Follis said. “So being able to play a part in achieving that for him and for us is awesome.”

With hopes of seeing West Jones’ winning tradition continue to grow, just as the former Mustangs who encouraged him in his own career, Follis offered a few words of advice for those who will succeed him as the trigger man for the West Jones Mustangs.

“The advice I would give quarterbacks in the future would be to soak up as much knowledge about the game as possible during the time when you might not be ready to step out on the field yet,” Follis said. “Then, once you’re on the field, just play relaxed, trust yourself and have fun.

“It definitely won’t be easy and it won’t always seem fun, but in the end, you’ll look back and realize how much fun it all really was.”