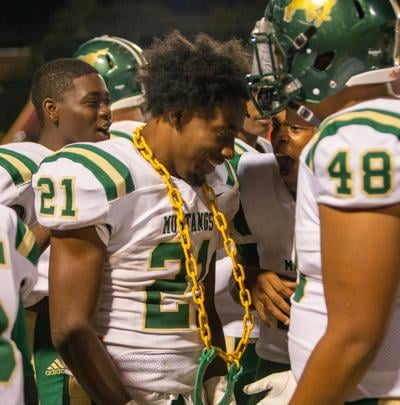 For the third straight year, the West Jones Mustangs are headed to the 5A South State championship.

The road to get there led them back Between the Bricks, where they faltered last month in a 19-13 loss to the Laurel Tornadoes. Focused and motivated, the Mustangs delivered one of their most complete performances of the season, earning a 42-21 victory.

Despite the three-touchdown advantage, head coach Scott Pierson said there were two plays that completely altered the outcome in his team's favor.

The first play came early in the second quarter. Trailing 7-6, senior quarterback Dexter Scott had led the Tornadoes roughly 60 yards down the field for an opportunity to reclaim the lead. That's when senior cornerback Cedric Bender forced a fumble at the one-yard line with a huge hit, recovered the ball and returned it 99 yards for a Mustang touchdown.

"That was the play of the game," said head coach Scott Pierson. "If that (play) doesn't happen, I don't know if the momentum changes; and Laurel is an awesome team when they get the mojo going. That play changed the whole outcome, I really believe it. (Bender) played unbelievably. There are a lot of folks missing out on that kid. He's a heck of a ball player."

The second key play came just after halftime. Coming out of the locker room with a 28-14 advantage, West Jones scored again on the opening play of the third quarter, by way of a 60-yard senior connection between quarterback Alan Follis and wideout Tajrick Randolph.

Pierson said he credits the score to the wise decision-making of his senior signal caller.

"They came out in straight man (coverage) with seven in the box, and my quarterback checked to that play, which is what you expect from a senior. ... When they've been playing since they were sophomores, they're supposed to be at that level, and I think that's why we are where we are."

The Mustangs scored 14 more unanswered points, with rushing touchdowns by Follis and Pruitt to pull ahead 42-14. Scott scrambled for one final Tornado touchdown mid way through the fourth quarter before West Jones' offense drained the remaining time on the clock.

Next Friday, the Mustangs will travel to Pascagoula to take on the Panthers, who defeated Hattiesburg 35-32 in overtime. Pierson said his veteran leaders have experienced both victory and defeat in South State competition, and he believes they'll be focused and prepared for the task at hand.

"They loved it when we won it, and they had a really hard time swallowing it when we lost," Pierson said. "I think they're on a mission -- and I know we are as coaches -- to get back to Jackson. I like my kids. I really, really do. It's a good group of kids."