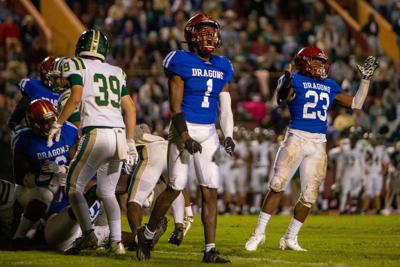 The Tornadoes also paid homage to the defensive dominance that propelled them deep into the postseason in 2019. Laurel’s defense held the Mustangs’ offense to two scoring drives and made multiple fourth-quarter stands to secure a 19-13 victory and reclaim the Leader Call’s Jones County Championship belt.

For head coach Ryan Earnest, Friday night’s victory was the long-awaited result of resilience shown by his team throughout the season, which now stands atop the Region 3-5A standings despite starting the season with an 0-3 record.

“These kids just keep fighting,” Earnest said. “There is no quit in these guys. Absolutely none. Everybody wrote us off. We’ve been banged up and bruised, but they’ve come to work every day with the right mentality and great attitudes. We knew we were capable of winning this type of game.”

As was only fitting, the Tornadoes faced early adversity on Friday as well. A 59-yard touchdown pass from Alan Follis to Marlon Lindsey, followed by a 35-yard field goal by Joseph Hernandez, lifted West Jones to a 10-0 advantage early in the first quarter.

The Tornadoes then mustered up a momentum swing of their own to erase the deficit. Quarterback Dexter Scott launched a 69-yard touchdown pass to Dandy Dozen receiver Kanarius Johnson. Two minutes later, defensive back William McCullum picked off a pass attempt by Follis and returned it 25 yards for a score. The point after attempt was blocked by a host of Mustangs, leaving Laurel with a 13-7 lead entering the second period.

With two minutes remaining in the first half, Hernandez tacked on three more points with a 26-yard field goal to tie the game, 13-13, before entering halftime.

Showcasing his athletic abilities outside of the pocket, Scott scrambled for a 34-yard touchdown on Laurel’s first drive of the second half to once again put the Tornadoes ahead with a 19-13 lead that stood for the remainder of the contest.

Scott was 11-for-23 passing with 147 yards and a touchdown, along with plus 31 yards rushing and another score on the ground.

“He’s doing the things we’ve asked him to do,” Earnest said of his senior signal caller. “He’s taking care of the football and making big throws when we need them. He’s turning into the player we believed he could be, and the sky is still the limit for him.”

Follis finished 14-for-32 passing with 196 yards and a touchdown. He also led the team in rushing with 101 yards on 19 carries. Lindsey led the receiving corps with four catches for 116 yards and a score.

Friday night’s loss was the first regular-season defeat the Mustangs have faced since October 2018, which was also on the road against the Tornadoes, 23-17.

The Tornadoes will look to continue their mid-season surge next week when they travel to Brookhaven for another region contest against the Panthers.

The Mustangs will return home to host the Natchez Bulldogs, eager to erase the taste of Friday night’s defeat with another victory in region play.