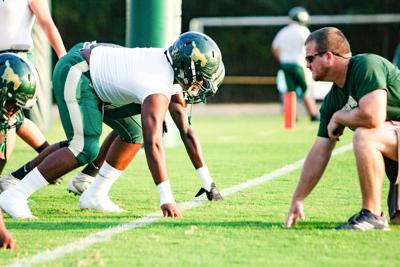 The West Jones’ Mustangs have high hopes and lofty goals for the 2020 season, and deservingly so. Last fall they ran the regular-season gauntlet, entering the playoffs with an 11-0 record for the fifth time in 18 seasons under head coach Scott Pierson. The season ended on a sour note, however, as the Mustangs were dominated by Picayune in the 5A South State title game, falling just short of a second straight state championship game appearance.

With a wealth of returning talent and experience on the roster this fall, West Jones will be eager to wipe that bitter taste of defeat from its mouth by returning to its winning ways. The first opportunity to do so will be Friday night, when the Mustangs host the Raleigh Lions in the opening game of their 2020 regular season.

Raleigh is coming off a 6-6 season, its most successful campaign since 2016 when former head coach Jeff Stockstill departed to take over the football program at Forrest County Agricultural High School. Now under yet another new regime with first-year head coach Ryan Higdon taking the reins, the Lions will look to capitalize on the things that worked last fall and continue the development of a few extremely talented young players.

Raleigh’s success last season was rooted in a diverse rushing attack with many contributors, totaling more than 1,700 yards on the ground despite no individual players accounting for more than 548. Although the team’s two leading rushers graduated in the spring, Higdon is excited to see sophomore Suntarine Perkins step into a larger role in their absence.

With his 6-foot-3, 200-pounds frame, Perkins is as imposing a force as almost any 15-year-old in the Pine Belt. He performed at a high level on both sides of the ball as a freshman, racking up 355 total yards and seven touchdowns on offense while also leading the Lions’ defense with 101 total tackles and six interceptions. He showed enough potential to earn the attention of the reigning NCAA champion LSU Tigers, who offered him a scholarship in the spring. Perkins will now be expected to lead the way for the Lions as he continues to develop his game and grow into his potential.

West Jones boasts more than its own fair share of elite playmakers on both offense and defense, with depth and versatility being two of the team’s strongest assets entering the 2020 season. That was proven last Friday in the Mustangs’ jamboree when they ran rabid over the Mendenhall Tigers for a 32-7 win in just two quarters of action. Senior quarterback Alan Follis returns for his third season under center with a 25-4 record as a starter. He’s joined in the backfield by fellow senior Kentrel Pruitt and junior Joshua McDonald, a pair of running backs who combined for 1,500 yards and 25 touchdowns on the ground last year. Follis will have a couple of 6-foot-3 receiving targets out wide in senior Tajrick Randolph, who led the team in receiving yards and touchdowns last fall, and sophomore Matthew Nixon, who led the Mize Bulldogs’ receiving corps as a freshman before transferring to West Jones during the offseason.

The Mustangs’ defense should be strong as ever, with just as many returning pieces as the offense. Helping lead the way will be linebacker Ken Russell, who was selected as All Leader-Call Defensive Player of the Year in 2019 after leading all of Region 3-5A in total tackles as a sophomore. Russell’s second-year performance helped the Mustangs hold opponents to just over 11 points per game, which paled in comparison to the 37 points averaged by the Mustangs’ offense.

While West Jones and its opponents from Raleigh enter Friday’s matchup in different stages of success, both teams are optimistic about their potential to succeed in the season ahead. Only one, however, will be able to kickoff its campaign with a mark in the win column.

The opening kickoff for this contest at “The ‘Shoe” is set for 7 p.m., with attendance limited to 25 percent of the stadium’s seating capacity.