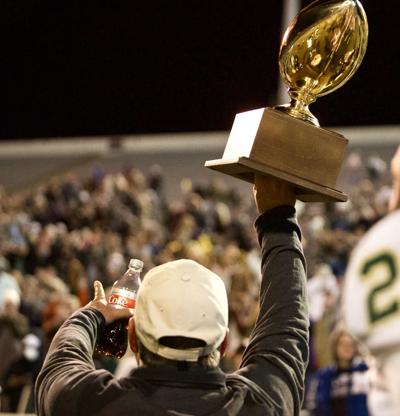 In an unforgettable contest with the outcome remaining uncertain until the final minute, there was never any doubt who the West Jones Mustangs were playing for; and in the midst of the celebration of their 33-27 victory over West Point for their first football state title in school history, head coach Scott Pierson seized the opportunity to make it perfectly clear.

In the middle of his post-game interview, Pierson grabbed the golden ball that had evaded him and the Mustangs for so many years, walked over to the visitors’ side of Mississippi Veterans Memorial Stadium where thousands of Mustang fans still remained and hoisted the trophy high in the air, mouthing the words, “This was for you.“

Getting the win on Saturday night over four-time defending champion West Point Green Wave took everything the Mustangs had in their arsenal, starting with a four-minute opening drive and a five-yard touchdown run by Kentrel Pruitt to give West Jones an early 6-0 lead.

The Green Wave responded with a long, physical drive, capped off with a two-yard touchdown run by Cameron Thomas. The extra point attempt gave West Point a 7-6 advantage entering the second quarter, but senior quarterback Alan Follis and the Mustangs’ offense made sure it was short lived.

Follis connected with Marlon Lindsey on a deep pass to bring the Mustangs inside the red zone, and Pruitt secured his second touchdown of the night on a one-yard run to reclaim the lead for West Jones, 13-7.

After a three-and-out forced by the Mustangs’ defense, Follis orchestrated a third  scoring drive, ending with a touchdown run by Ken Russell out of a wildcat formation to lift West Jones ahead 20-7.

Knowing it needed to make a big play to avoid falling out of contention, West Point’s defense forced a fumble that was returned 34 yards for a touchdown by Antonio Facella with under a minute remaining in the half, slicing the deficit in half.

Young returned the opening kickoff of the second half 72 yards to the West Jones one-yard line and scored on the following play, but a missed extra point attempt left the score tied 20-20.

The two teams traded blows again on the next two drives, with the Mustangs scoring on a five-yard run by Follis and the Green Wave responding with a third touchdown run by Young. Entering the fourth quarter, the score remained tied 27-27.

West Jones’ winning drive featured a heavy dose of senior receiver Tajrick Randolph, who finished the game with five receptions for 104 yards. Follis and Randolph connected three times on the drive for 54 yards, and Pruitt finished it off with a four-yard scoring run, his third of the night.

With under two minutes remaining, West Point found itself facing a fourth-and-10 situation inside West Jones territory. Thomas threw a deep pass to Joseph Vance sailed above its perfectly-defended target, ending the possession and allowing Follis to end the game by taking a knee.

West Jones’ first state championship season ends with a 13-2 official record. The final victory in Jackson was Pierson’s 175th as head coach of the Mustangs, making him the winningest football coach in school history.

For a full recap and more insight on Saturday night’s contest, see Tuesday’s edition of the Laurel Leader-Call newspaper.