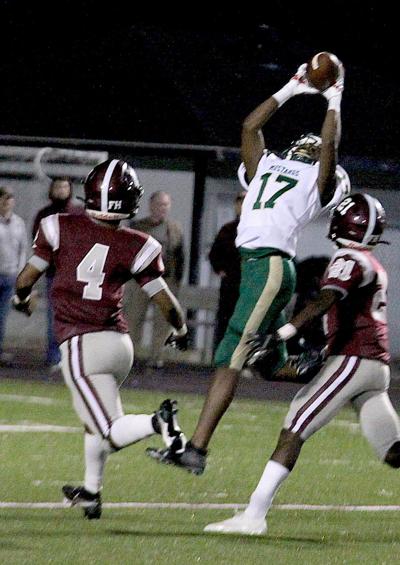 PICAYUNE — Alan Follis’ fourth touchdown pass of Friday night was the play that put Picayune away, 35-23, as West Jones won a tough first-round matchup in the Class 5A playoffs.

Zyquawn Williams went up in double coverage, snagged the ball and sprinted for a 52-yard touchdown on third-and-10 that sealed the victory for the Mustangs with 2:34 remaining. He made a similar catch in the final minute of the third quarter for a 35-yard TD after the Tide (8-3) had made it a four-point game.

The Mustangs (10-2) jumped to an early lead after Picayune fumbled away the opening kickoff and on its first possession. Follis hit Marlon Lindsey from 9 yards out then, less than a minute later, connected with Tajrick Randolph from 27 yards to make it 14-0.

But Picayune began chipping away. Morgan Craft booted a 27-yard field goal near the end of the first quarter and Austin Samples scored the first of his three TDs from 10 yards to pull within 14-10 at the half.

Kentrel Pruitt scored from 15 yards to cap off West Jones’ first drive of the second half, but Samples answered with a 3-yarder to make it 21-17 midway through the third.

Follis found Williams from 35 yards to give the Mustangs a little breathing room, 28-17, going to the fourth, but Samples scored from 6 yards with 3:32 remaining to make it 28-23.

It looked as if the Tide’s defense was going to stop the Mustangs at midfield and get the ball back for a chance to win it in the final minutes. But Follis’ strike to Williams all but wrapped up the win. Joseph Hernandez kicked all five extra points for West Jones.

Picayune’s last possession ended when Cedric Bender made an interception at midfield.