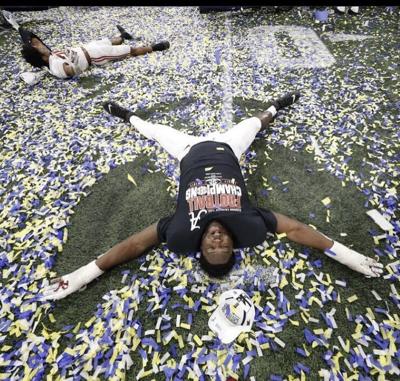 When former West Jones Mustang Byron Young announced his commitment to the University of Alabama in 2019, the ultimate goal was to help the Crimson Tide continue its tradition of winning national titles. On Monday, Young will have the opportunity to cap off his sophomore season by doing just that, when he and the Tide take the field in Miami to play Ohio State for the 2021 College Football Playoff National Championship.

Watching from afar this season has been Young’s former high school coach, Scott Pierson, who isn’t surprised to see Young and the Tide continuing to excel.

“They’re the best players in the country. I mean, that’s what it comes down to,” Pierson said. “Obviously, they have great coaching, but those players are the best of the best at what they do, and that’s easy to see when you watch them play.”

The values instilled in Young by his parents have helped him thrive on college football’s biggest stage, Pierson said.

“I think it all goes back to Kenny and Melissa,” Pierson said. “They clearly did an excellent job of raising him. Discipline was always an important part of his life, and he’s never gotten away from that. He’s a hard worker. He’s the first one to show up for workouts and the last one to leave, and when you’re competing against the best of the best, that’s the kind of work ethic you’re expected to have.”

Though head coach Nick Saban’s program is used to playing for national titles, Young and the Tide battled unordinary circumstances in 2020 to reach the big dance. After a shortened preseason, teams throughout the country faced abnormal routines and schedules that were often altered at the last moment due to COVID-19. However, Young said the journey was not quite as abnormal for the goal-oriented Tide as many fans might assume.

“It hasn’t been as different or as difficult as a lot of people think,” Young said. “We wear masks everywhere we are at all times, and we try our best to stay apart, but we’ve had normal practices just like last year, along with normal lifts, although we do wear masks during our lifts. The thing I think I’ll remember the most is just having to wake up at 6 in the morning to take a COVID test everyday for about two months.”

The Tide’s reluctance to veer off course in its quest for excellence paid off with a 12-0 record entering Monday’s big game. Last month, Alabama defeated Florida in a 52-46 shootout to claim its 28th SEC championship, and last week, the team punched its ticket to the national championship game by defeating Notre Dame in the Rose Bowl, 31-17.

Having dreamed of being in these situations from the time he was a small child, Young said the reality of what has occurred has not really sunk in yet. He and his teammates will take time to reflect on these accomplishments later on. For now, their sole focus is on winning one more game.

Young, who helped lead the Mustangs to a Class 5A South State title in 2018, remembers all too well how disappointed he and his teammates were when they fell short in a 27-12 loss to West Point in the state championship game. Determined for a different outcome this time, Young said the only thing on his mind as he prepares for Monday is finishing strong.

“It really hasn’t hit me yet,” Young said. “I feel like it’ll take a while for that to happen. Right now, I’m just focused on doing what it takes to get the final result that I and all of my teammates want, so I really haven’t had a chance to think about it. Winning all of the games and the Rose Bowl doesn’t really mean anything if we don’t win this one.”

For the season,the 6-foot, 3-inch 292-pound sophomore has recorded 29 tackles, with 6 ½ tackles for loss and a sack. He also has recovered a fumble.

Young said the Tide has the utmost respect for the Buckeyes and what they have accomplished during their own journey through the pandemic, and he believes he and his teammates will have to continue executing at a high level in order to reach the outcome they desire on Monday night.

“I think they’re a great team,” he said. “They do everything very well, especially on offense. They’ll challenge us to do everything they do. We all have to be on the same page at all times and be in the right position. For us to have success, we’ll just have to do our jobs,” Young said.

The opening kickoff in Monday’s contest is scheduled for 7 p.m., and the game will be aired on ESPN. Alabama is an eight-point favorite over Ohio State.

Byron, you family is very, very proud of you. Continue to be the God loving and fearing man that you are, and you will continue to succeed. RTR!!